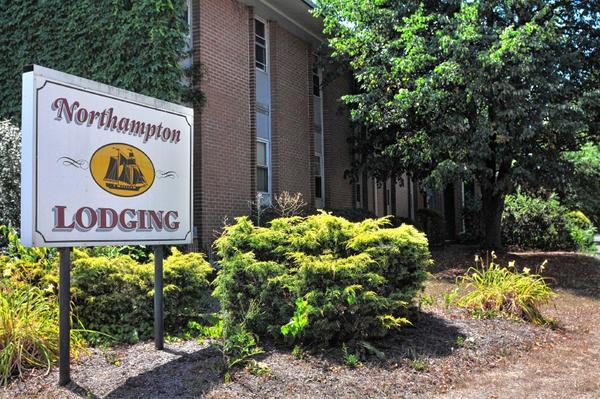 
Cities in New England and elsewhere used to be dotted with SROs. That stands for single-room occupancy, a type of affordable housing often considered a last resort before homelessness.

Residents live in single rooms next to strangers, who all share a bathroom and kitchen.

This housing option has gradually disappeared in recent years. But advocates are trying to take the idea of SROs and give them an upgrade, so that even people who don't have to live there might choose to do so.

For many years, in Northampton, Massachusetts, the most visible SRO was a low-rise building in the downtown called Northampton Lodging.

The former college dormitory was built in the 1960s and later converted into low-cost housing. By the time it closed, about 60 people lived in 100-square-foot rooms with thread-bare carpeting and an ancient electrical system. They shared bathrooms and kitchens -- and very thin walls.

Bradford Ward lived in one of those rooms until about three years ago.

"I had comforters. I put them up on the wall, and put stuff up in the walls that block the sound," he said.

Ward said he did make good friends there but missed his privacy.

"People are always sticking their nose into your business, and I don't like that," he said. "People are knocking on your door every five minutes and saying, 'Can I borrow this, get that.' I just had to put my foot down and get in your face and telling them, 'Get away from me and don't come back.'"

The 71-year-old former Marine eventually put a sign on his door that said, "Don't bother me." And he never invited his children or grandchildren to visit.

"I wasn't proud of my accommodations, the building," he said. "Plus, the place had a bad reputation."

Ward's road to Northampton Lodging was winding and unexpected.

He was married, raised two children and had his own landscaping business. He and his wife bought a house in Springfield, but they broke up. She got the house, and he never managed to build up a new business. He took a job as a prep cook and lived with a friend for a few years. And then, he said, was treated for cancer.

“I came out of the hospital and had seven cents in my pocket,” he said.

That's about when Ward learned of Northampton Lodging -- and the type of housing called single-room occupancy. For about $500 a month, he'd get a room near his downtown job.

Ward kept thinking it was temporary, but he stayed for six years.

"I was looking for other places, and a lot of the places are pretty much out of my means," he said.

Single-room occupancy has origins in the boarding houses of the 1930s and 1940s.

"I think it was most often for folks who were working, making a modest weekly wage," said Laura Baker of Valley CDC, which develops and manages low-cost housing. "Folks who were retired, folks who were young and working but not yet married. It served a whole range of parts of the population."

In those days, SROs were often run by a landlord who genuinely cared about the tenants. But over time, Baker said, conditions declined. By the 1960s and '70s, SROs were often seen as havens for the marginalized, mentally ill or addicted. Yet they still served a purpose.

"We think of it as being an essential part of the housing ecosystem," said Baker. "For lots of folks, it's a transitional place to live. For some people, it's their home for many years. And there isn't anything quite like it in terms of cost."

There used to be two dozen SROs in Northampton alone. Baker took out a list from 20 years ago, and pointed out a number that no longer exist. She said most of them closed to make way for market-rate housing -- a sign of gentrification.

“There are some folks who would draw a direct line between increased homelessness and decrease in this kind of housing stock,” Baker said.

So nonprofit housing organizations often try to buy up the SRO buildings with the hope of bringing them to higher standards while keeping them low-cost.

One of these organizations, Springfield-based Way Finders, bought the 58-room Northampton Lodging from its longtime owner in 2015. Using private and public funds, they razed the smaller building to make way for a new $20 million complex.

Faith Williams, a vice president at Way Finders, recently gave a tour of a studio apartment in the new building, pointing out the spacious kitchen, new cabinetry, nice views and wheelchair-accessible bathroom.

“It’s, like, twice the size of my bathroom at home,” Williams said.

The complex, called Live155, is opening to tenants in May. It will have 70 units, more than half reserved for low-income tenants using a mix of government subsidies. The rest will be market rate -- at about a thousand dollars a month.

Williams said this makes the project more viable, and helps reduce the stigma of affordable housing.

"It is not our intention to share with anybody what their neighbor's income is," she said. “It's not like there's a little sign on the door that says, ‘This is an affordable unit, and that's not.'"

Williams said the downtown location and new construction is meant to attract market-rate tenants. And there's no reason lower-income tenants shouldn't get the same perks.

“A number of residents who live in our properties work at places like Walmart, and they work a lot of hours,” she said. “They need a place to live, in my opinion, that isn't dreary and grim.”

While Way Finders was building the new complex, they helped the tenants of Northampton Lodging find other places to live.

That's how Ward found himself on the other side of downtown in a one-bedroom apartment, which he much prefers to his previous single room. But he can't afford to stay there much longer on his social security income.

Way Finders is encouraging Ward to move to Live155, which he's been watching go up with interest.

"I snuck in there one day when they had construction going on," he said. "They were showing people around, and they left the hard hats in there. So I put a hard hat on and walked through the building with them."

The building itself is great, Ward said -- spacious, energy-efficient. But he's nervous about moving back into a place modeled on SRO housing. He's wary the previous problems -- like noise, panhandling and drug use -- will rear their heads.

He hasn't decided if he'll invite guests over.

“I want them to feel comfortable," he said. "I don't want them feeling when they come into the building they're going to be harassed."

Williams said he need not worry. Way Finders will be a much more proactive property manager than the previous landlord.

But housing advocates are worried about the future of SROs. They say there's already tough competition for federal housing grants. The Trump administration is now trying to reduce housing subsidies, and with the new tax law, it's harder to make use of federal housing tax credits.

Baker said she’s concerned that the economic pressures on affordable housing projects help to explain why SROs are disappearing.

“Unless you have some other mission, why would you do this?” she said.

Way Finders doesn't expect to make a fortune on the new property, but Williams said they expect at least to break even. For now, they've only rented out about half the units -- and none of the ground-floor retail space. She hopes it will all be filled this summer.