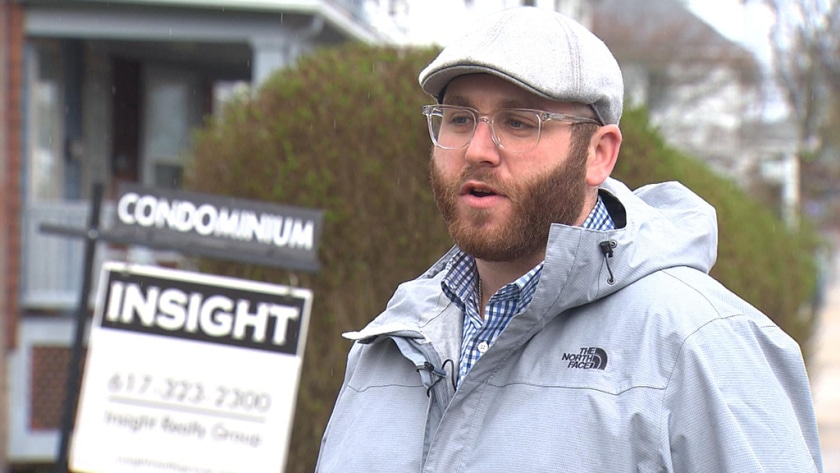 BOSTON (CBS) – It has been one disappointment after another for Maxwell Sparr of Brighton. For months he has been searching for a house or a condo in Boston.

“This is the fifth or sixth property that I have lost out on,” he said, pointing out a perfectly manicured duplex in Roslindale, his latest disappointment thanks to an above asking all-cash offer.

High prices, bidding wars and cash investors have made house hunting a frustrating experience for all but the very wealthy in Boston and many of the suburbs.

“To a person like me who is a first-time home buyer, it’s extremely frustrating to not even have a chance,” he said.

It is an all-too common story and one that worries Marcy Ostberg of Boston’s Housing Innovation Lab.

“There is a risk of losing our middle class and we’ve got to figure out how to keep them here,” she said.

As director of the Lab, it is Ostberg’s job to figure out how.

“We need to be creative in how we can build affordable housing at different income brackets,” she explained.

Ostberg and her team are tasked with helping meet the City’s goal of creating 53,000 new housing units by 2030.

One idea that’s already in the pipeline: ADU’s, or Additional Dwelling Units.

The city is making it easier for homeowners to get permits to add small, rentable units in an attic or basement. The Lab is piloting the program in three neighborhoods and if all goes well they hope to expand. Down the road, the hope is to include additions and even backyard units as well.

MIT graduate James Shen already has an idea in place to make those backyard units simple and affordable. He has designed what he calls a plug-in house that can be constructed in one day using only an allen wrench.

“It’s kind of like an Ikea thing,” Shen joked as he was helping to assemble a model home on Boston’s City Hall Plaza. “It comes flat packed, delivered onsite without a crane or anything.”

The idea of making it easier for homeowners to build extra units has also been on Gov. Baker’s radar. He sponsored a bill that would make it easier for cities and towns to ease zoning restrictions to help facilitate this type of building.

The City of Boston is also looking to make the most of its own property. The Housing Innovation Lab has asked developers to come up with plans to redevelop aging libraries, fire stations or other city-owned buildings to add housing units on top.

“We got 27 responses back and they were all really interesting,” Ostberg said.

Ostberg’s team is also trying to innovate in terms of financing. She would like to see a way that several buyers could pool their money and be their own developer by either rehabbing an existing property or building something new.

The other new idea coming to Boston is called “co-living.” Developers are planning a building in the trendy Ink Block neighborhood that is part luxury apartment and part dorm. It’s called Ollie and WBZ-TV recently traveled to a similar building in New York City.

Essentially, renters lease a bedroom and the kitchen area is shared with the folks who live in two other rooms within the unit. The rooms are small, most containing pull out Murphy beds. But the New York apartments are about 30 percent cheaper than renting on your own.

The building has a number of different common spaces and there are planned social activities. The units come fully furnished, with everything down to the coffee mugs, towels, weekly maid service and Wi-Fi. According to Ollie co-founder Chris Bledsoe, those extras add real value.

All of these ideas could help ease the housing crunch that experts say will only get worse if Boston lands the second Amazon headquarters. Something that worries Maxwell Sparr.

“If Amazon comes, where are they going to go? I think it’s going to drive prices through the roof,” he said.

We want to hear the stories of what you’re going through when it comes to housing in our area. Tell us your story by emailing newstips@wbztv.com.