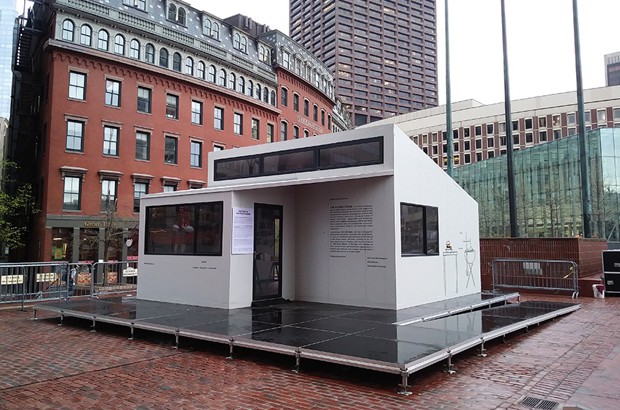 Last week, a prototype of a simple, 360-square-foot dwelling called the Plugin House appeared outside Boston City Hall. The crisp white box, unfurnished but with portals for plumbing and electricity ready to go, took about 5 hours for a five-person team to assemble. It’s the brainchild of James Shen, who is in Boston this year from China as a Loeb Fellow at Harvard University’s Graduate School of Design, and it represents something significant: In a city where everything from roof decks to chicken coops is strictly regulated, Boston is encouraging residents to build little houses in their backyards.

Chalk it up to the severe lack of affordable housing in Boston, which has forced city leaders to get a little creative. “This is the start of the conversation,” said Marcy Ostberg, director of the Mayor's Housing Innovation Lab. “It’s a question we’re asking residents—what do you think about building in your backyard?”

So far, Bostonians checking out the tiny house—sleek and minimalist, and cozy in the shadow of the urban-renewal-era Brutalist structure that serves as local government headquarters—seem open to the idea. All kinds of people could use such housing in Boston, from kids out of college to seniors who would like to age in place.

Indeed, tiny houses, micro-apartments, and right-sized studios have been gaining in popularity in cities across the country. The Plugin House, like the “Katrina Cottage” that helped kick off the tiny house movement in the last decade, keeps things simple: easy and inexpensive to build, for as little as $50,000.

Yet there is one small problem: It is technically illegal to build a Plugin House in a backyard in Boston. It would be considered an accessory dwelling unit, or ADU, which property owners can have only by going through an arduous variance process. In Boston, ADUs have historically been frowned upon, sort of like Yankee fans.

But city officials are well aware of how many other communities have been pushing in the opposite direction—making it easier to have ADUs and granting amnesty to code-violating carriage houses and “granny flats.”

So concurrent with showing off the tiny house, Boston has also started to reform its dated rules. In November, the city began an 18-month Additional Dwelling Units Pilot, which allows homeowners in the neighborhoods of East Boston, Jamaica Plain, and Mattapan to create affordable housing in basements, attics, or a room or rooms carved out of the existing building envelope.

“We’re trying to think creatively about how to use our existing land most effectively.”

That might be a tiny step compared to places like Durango, Colorado, which has famously overhauled once-restrictive ADU rules, or Los Angeles, which is encouraging guest houses in backyards as a possible solution for its housing (and homelessness) crisis. In Portland, Oregon, the city “has set about creating the most ADU-friendly policies in the country,” CityLab’s Laura Bliss recently wrote.

But, in Boston, it’s a start. The ultimate goal is to increase supply and diversify the housing stock beyond the costly brownstone or luxury condo. Building in backyards, infill-style, also addresses the linchpin for affordable housing—the more efficient use of the land the homes sit on. “Land is one of the critical components in housing affordability,” says Ostberg. “We’re trying to think creatively about how to use our existing land most effectively.”

Encouraging accessory dwelling units fits in with a “silver buckshot” approach to addressing housing affordability: Instead of a single fix, an array of policies—such as inclusionary zoning requirements, shared equity housing, and community land trusts—should be thrown at the problem.

Shen’s instant-house design springs from a project called the Courtyard House Plugin, which he created for Beijing’s central historic district. The prefabricated building system he developed uses a collection of insulated panels that fit together like pieces of a puzzle.

The Plugin House is bolted together with simple hand tools and requires no skilled construction labor. There is no traditional framing, so less material is needed to begin with; the panelized system also allows the building to be added to or subtracted incrementally. The panels are made of insulation many times as efficient as typical batt insulation, saving on heating and cooling in the long term, Shen says.

Shen, who filled out an online form to meet with Ostberg when he knew he would be spending the year at Harvard, has been meeting with city officials from the fire chief to Inspectional Services, and getting great feedback. An estimated 1,500 people toured the house since it sprouted on City Hall Plaza. Hundreds of people checked it out as well at Harvard Yard, where Shen and his team assembled the prototype across from Widener Library.

He was cheered by all the people watching the house go up in busy downtown Boston. Across from the Plugin House at City Hall Plaza, other workers were also putting the finishing touches on a new area called the Patios, which included a creamery, mini-golf, and a beer garden.

The pop-up approach for such programming, symbolized by the now-common food truck, is well-established. It was surely satisfying to see that affordable housing could pop up just as readily.