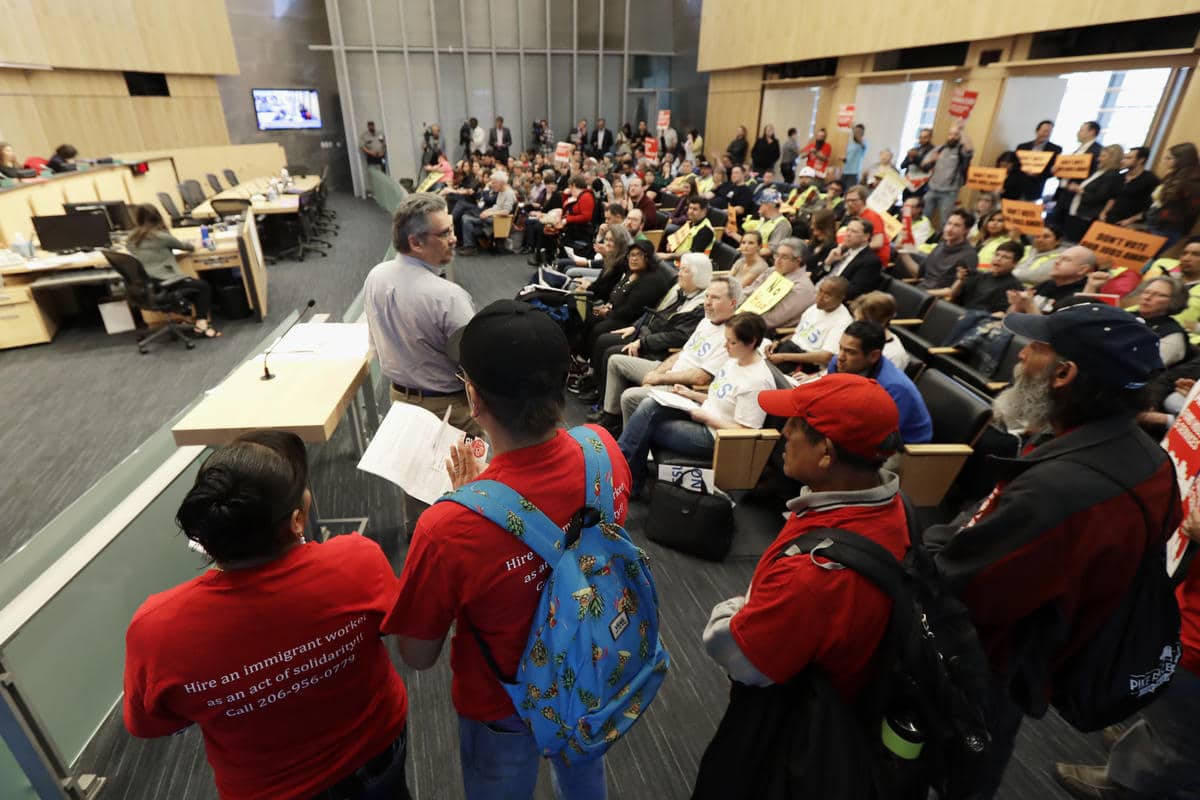 
SEATTLE — Seattle leaders on Monday unanimously approved a tax on large businesses such as Amazon and Starbucks to fund the fight against homelessness after weeks of heated debate and raucous hearings.

The City Council backed a compromise plan that will charge large businesses about $275 per full-time worker each year, lower than the $500 per worker initially proposed. It would raise about $48 million a year to pay for affordable housing and homeless services.

Council members who sponsored the initial proposal said the amount wasn't enough to address urgent housing needs but conceded they couldn't get the six votes to override a potential veto by the mayor.

The compromise measure emerged over the weekend after Mayor Jenny Durkan indicated Friday that she wouldn't support the tax at the higher rate.

Councilmember Lisa Herbold, one of the tax's sponsors, said she struggled with the compromise package given how many people are struggling but that it was the "strongest proposal" they could bring forward.

"People are dying on the doorsteps of prosperity. This is the richest city in the state and in a state that has the most regressive tax system in the country," said council member Teresa Mosqueda, a co-sponsor of the measure who said the plan gives the opportunity to build the housing the city needs.

They voted as people packed the meeting, holding signs saying "People before profits" and chanting "housing is a human right."

Other cities have implemented similar taxes, but critics say Seattle's tax could threaten the booming local economy and drive away jobs.

Nearly 600 large employers making at least $20 million in gross revenue would pay the tax that would begin in 2019. Amazon, the city's largest employer with 45,000 workers, would take the biggest hit.

The debate over who should pay to solve a housing crisis exacerbated by Seattle's rapid economic growth comes amid skyrocketing rents and rising homelessness. The Seattle region had the third-highest number of homeless people in the U.S. and saw 169 homeless deaths in 2017.

Supporters insist the online retailer and others that have benefited from Seattle's prosperity and contributed to growing income inequality and skyrocketing rents should pay.

Businesses and other critics say the tax is misguided and potentially harmful. They question whether the city is effectively using the tens of millions of dollars it already spends on homelessness each year.

Amazon raised the stakes this month when it halted construction planning on a 17-story tower near its hometown headquarters as it awaits a tax vote. It also is rethinking filling office space in another leased building. The two office spaces would accommodate about 7,000 new Amazon jobs.

The company's threat to pause its growth in Seattle comes as 20 cities vie to lure the company's second headquarters and as it expands its workforce in Boston and Vancouver, British Columbia.

Proponents say people are dying on the streets, and while city-funded programs found homes for 3,400 people last year, the problem deepens.

Shannon Brown, 55, who has been living a tiny home at a south Seattle homeless encampment, said there's simply not enough housing for the city's poorest people.

"I live in a little shed, but it's better than living in a tent or in a sleeping bag on the street," she said as she stood in line an hour before Monday's meeting began. "There's no away I can afford to live in Seattle. I don't understand why businesses think it's wrong to help."

John Boufford with the International Union of Painters and Allied Trades said he didn't understand rhetoric against Amazon, which he noted provides good jobs for thousands of people.

"They're driving this economic engine," he said. "I'm confused about why the city of Seattle is fostering an adversarial relationship with businesses in this city."

The city spent $68 million on homelessness last year, and some said they wanted to see the city prioritize its money better.