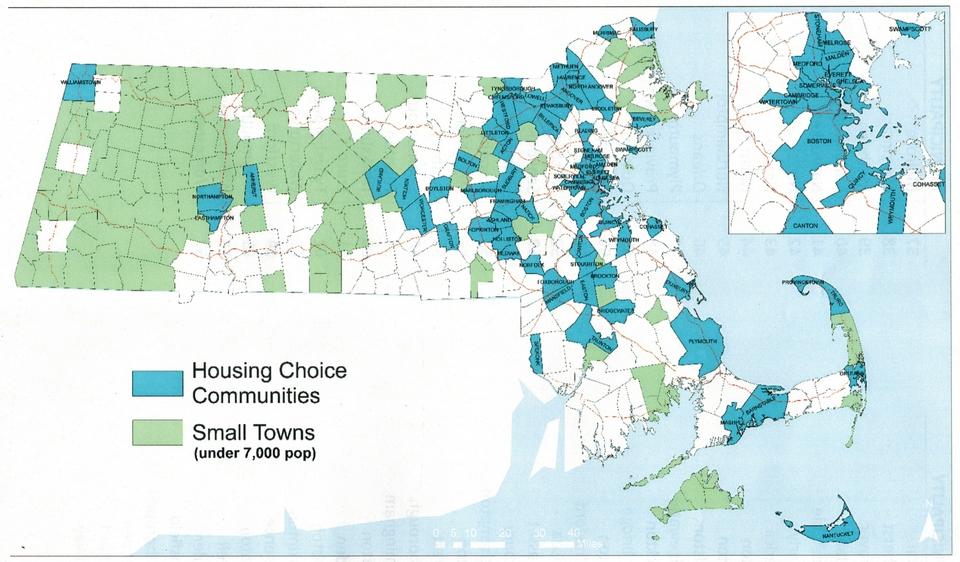 
Baker administration officials on Monday saluted 67 cities and towns as new “housing choices” communities, promising support and funding to the communities, which Lt. Gov. Karyn Polito said are “part of the solution” to the state’s housing supply problem.

“Build, baby, build is my motto,” said state Housing and Economic Development Secretary Jay Ash, a Gov. Charlie Baker apppointee, adding that he hopes that building various types of housing will create downward pressure on housing costs and assist with economic growth. “The more housing we build, the better our economy will be.” According to Ash, his motto has now been adopted by “so many communities” in Massachusetts.

With the state’s economic growth already feeling some drag due to workforce constraints, the Baker administration has set a goal of creating 135,000 new housing units by 2025. Cities and towns, which have not always been receptive to more development but may be hungry for new tax revenues at a time when major tax hikes have been off the table on Beacon Hill, are beginning to buy into the administration’s approach.

The initiative includes a bill filed by Gov. Charlie Baker that would allow zoning changes to be made with majority, rather than super-majority approval at the local level, a change that supporters believe would remove a major obstacle to housing development in cities and towns that are each governed by their own zoning rules.

While that bill remains at the committee level, top Democrats appear mostly receptive to the administration’s housing push.

“If You Build It, They Will Come”

Sen. Karen Spilka, who Democrats plan to elect Senate President in two months, lavished praise on Baker administration officials and said she hoped the number of communities with the housing choices designation would double by this time next year. She described a need for all types of housing - affordable housing, workforce housing, housing for seniors, housing for first-time homebuyers and housing that is located near downtown areas and public transit hubs.

“Housing, like food, is sort of a breath of life for people. And for far too long the commonwealth has not done what it should do, really focusing on the need for housing for people across the Commonwealth,” Spilka said. “If there’s no housing for people companies could be coming, but if they don’t have a place for their people, their employees to live, they’re just not going to come. So in truth this is a situation where if you build it they will come.”

Polito said the housing choices initiative, launched in December, is a voluntary program with incentives for municipal participants. The administration, for instance, handed out grants to 15 communities to help officials with planning and housing production. The grants could help more cities and towns that are vulnerable to large 40B developments because they have not reached a 10 percent affordable housing target outlined under Chapter 40B.

The grants could be used to craft new zoning rules, to plan public infrastructure improvements, or on initiatives aimed at building support for new housing.

The program rewards communities that produce certain rates or amounts of new housing over five years and that have adopted practices to create new housing.

Scituate is advancing the creation of a housing district around its Greenbush commuter rail station and exploring the creation of affordable starter homes. Truro is designing a water line extension to support the redevelopment of a town parcel into 32 new housing units. And Abington and Rockland plan to open up the capacity for 183 new housing units with water treatment plant upgrades that will facilitate developments stalled by a lack of potable water.

“This is not a stick approach. This is a carrot approach,” said Polito, adding that the partnerships should lead to the “right kinds of housing” for cities and towns because it does not rely on state mandates and is based on local input.

“I have visited all 351 cities and towns,” said Polito, who has led an effort to cement Community Compacts with every city and town, another program that opens up access to small efficiency, regionalization and information technology grants for communites that agree to pursue “best practices” in areas like climate resiliency, financial management and sustainable development and land protection.

The new approach is needed, Polito said, because housing production over the last three decades in Massachusetts has slowed to half the rate of production during the 1960s, 1970s and 1980s. “We can’t keep doing the same things in Massachusetts and expect to grow our housing stock,” she said.

Michael Cahill, a former Democratic state representative who now serves as the mayor of Beverly, said the city’s housing choice designation stems from its creation of a district that will provide 75 new family housing units, housing, commercial and retail development near the Beverly Depot commuter rail station, and “supported housing” in downtown Beverly for seniors, adults with autism and formerly homeless individuals.

Ash said Northampton had parlayed a $50,000 planning grant into a $2.5 million MassWorks award and $3.5 million in affordable housing tax credits that were put to use on two housing projects, with a total value of $30 million, that created 125 units of housing in the city’s Pleasant Street corridor.

“We continue to have the funds necessary in order to support good housing projects,” Ash said.