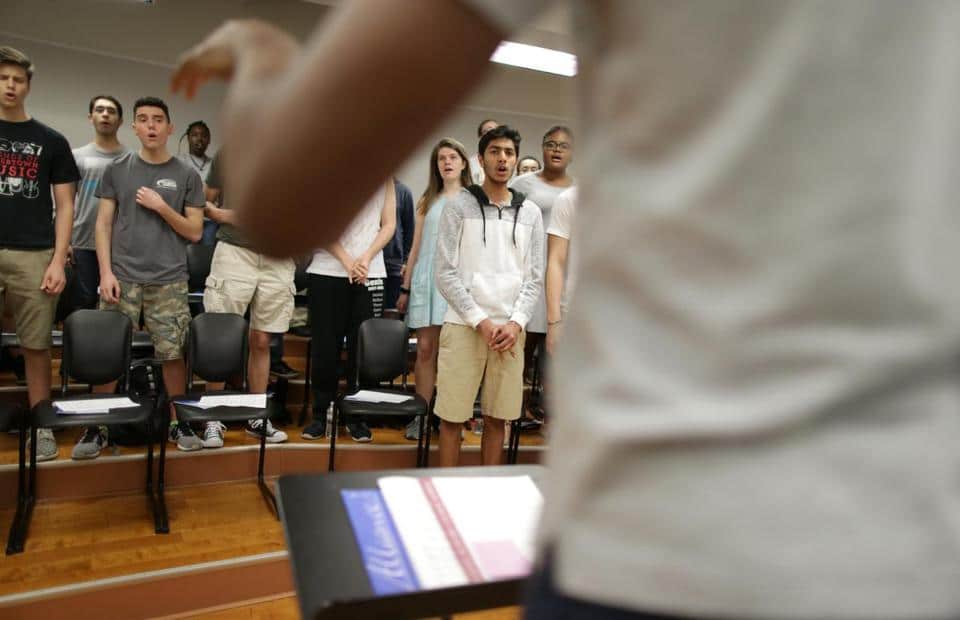 
What would a better Boston look like to you?

That was the question one nonprofit decided to ask youth leaders with the Boston Children’s Chorus and downtown professionals.

Some of the youngest members of the chorus wanted a city where nobody fought or argued. The older ones said “a better Boston would be cleaner and greener, with better roads and friendlier drivers.” All answers had a common thread: They wanted a city where people were united and where there was less violence.

“It’s OK to think differently,” one response read. “You can express your feelings to have less fighting.”

“I use music to inspire change by playing it when I’m mad or sad,” another wrote. “I sing because I want [people] to improve on [their] behavior and what they do with their life.”

The ongoing volunteer project was sponsored by Building Impact, an organization created to start conversations on race and social justice across the city’s various ZIP codes.

The chorus has students from schools across the state. Project organizers are planning to reach 500 corporate volunteers at dozens of companies downtown and have them exchange ideas by writing to hundreds of youth leaders in the chorus.

“I think our thought on this idea was to be able to create an open dialogue for the youth of the Boston Children’s Chorus to feel as though their voices were being heard,” said Bridget Akinc, CEO of Building Impact. “I think on the working professionals side there was a real opportunity to hear from youth directly on their vision for a greater Boston.”

The effort began with a questionnaire. The kids in the Children’s Chorus filled it out, and organizers brought the answers to corporate participants.

On a recent Thursday at the offices of JLL, a commercial real estate company, a group of adults learned about the Children’s Chorus, watched videos of performances, and reflected on its mission “to harness the power and joy of music to unite our city’s diverse communities and inspire social change.”

The adults read the kids’ reflections and took the time to respond in kind on music booklets they decorated to be delivered to the young people that afternoon.

“More affordable housing to keep families in Boston rather than fast-tracking luxury condo developments,” one wrote. “Give a daily compliment to a family, friend, or stranger in your community,” another wrote. They wrote inspiring quotes on the booklets such as, “Music is the universal language of mankind,” from Henry Wadsworth Longfellow.

Many of the adults said they were moved by the young people’s answers.

“I think it’s an amazing project to have children as young as 7 start thinking about how their voice can change Boston and that they’re not just another person on this planet, but someone who can enact change,” said Erin Gange, 27, of Brookline, a marketing associate at JLL.

“Everybody is talking about a greener environment and something more sustainable, which is just crazy to think that someone that young is thinking about how they can impact the world.”

Some of the chorus’s advanced singers received the booklets at their rehearsal. There, the conversation continued, led by BCC president and artistic director Anthony Trecek-King.

“Always seek out people with differences of opinions,” Trecek-King said to the group. “If we all think the same, it’s boring.”

They spoke about the differences among their communities. Some hailed from Chelsea, others from Milton, and they touched on Boston’s complex reputation nationwide.

“I think Boston has a history of notoriously disenfranchising people,” said Stephen Hart, 18, a 12th-grader at Boston Latin School. “It has a very racist history.”

But there was also a lot of hope that ongoing conversations like these would encourage change.

“You have a lot of people saying all these lofty goals like ‘equality and job opportunities and fairness and cleanliness,’ ” said Maya Fray-Witzer, 18, a 12th-grader at Lexington High School. “But it all seems to stem back to the fact that the way we can do this is by somehow understanding other people better.”