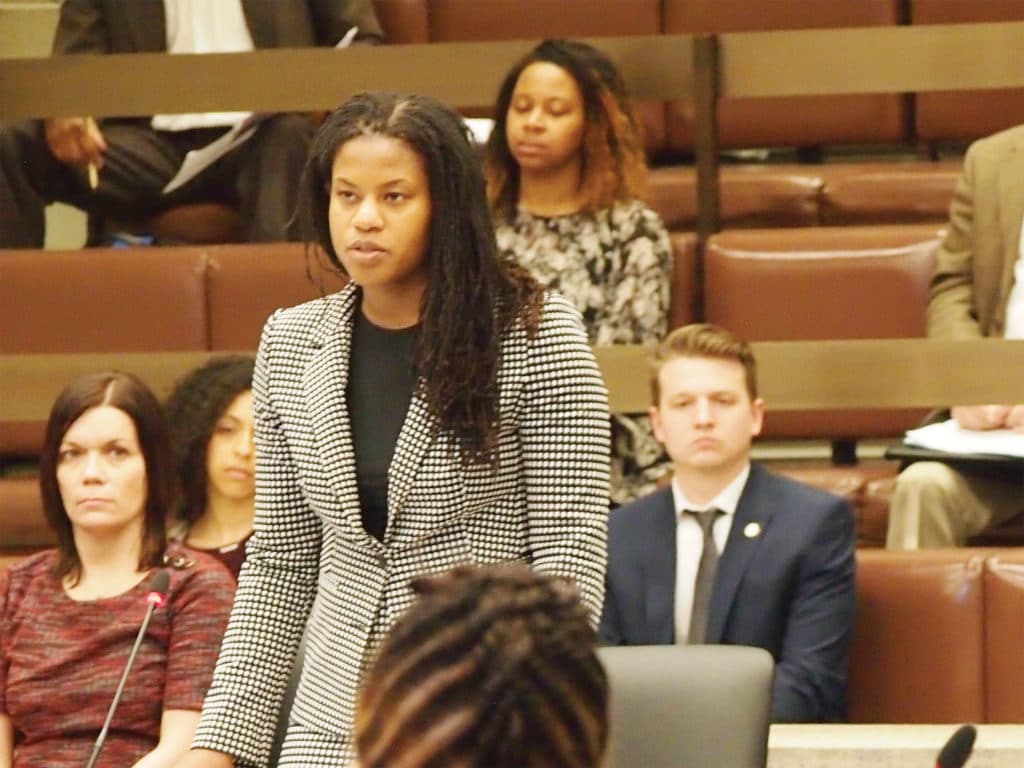 District 1 City Councilor Lydia Edwards has focused on housing issues in the city of Boston since her election in November. She brings to her new role her experience as deputy director of the Office of Housing Stability, appointed by Mayor Walsh in August 2016. She also has been a public interest attorney with Greater Boston Legal Services, where she worked on labor issues, and served as statewide campaign coordinator for the Massachusetts Coalition for Domestic Workers. In an interview with the Banner this week she discussed the growing need for affordable housing and the increasing issue of displacement. (The responses have been edited for clarity.)

You’ve taken on housing as one of your main areas of focus on the City Council. Why?

I think housing is the number one issue we’re facing, because it leads to so many other issues. Your ability to feel safe, your ability to gain wealth, your ability to get to work — all of that is connected, oftentimes, to where you live, the conditions that you live in, and, of course, your overall health.

How is the current housing market affecting the neighborhood where you live?

What’s your assessment of the city’s strategies for dealing with housing affordability? To what extent are those strategies working?

On the one hand, the city has done a lot to start a conversation about displacement and how it can be prevented. On the other hand, I think the city still believes that building more units is the best way to make housing more affordable because it creates more supply. And yes, we do need more units, but I do not think building is the only solution. I agree with the city and I am happy that we’re going to be regulating short-term rentals, but I think we also need to go further. We should be looking at flipping, foreign investment, and even the vacancy tax [a proposed fee for landlords who choose to keep properties empty while waiting for tenants who can pay higher rent]. We should be pushing for communities to receive more city land, because I think that no matter how much you build, unless you’re protecting the units that you’re building, you will never really catch up to demand.

What are some solutions to the housing affordability crisis that seem to be working in other cities?

When I was in the Office of Housing Stability, we looked at certain pilot programs, like the Landlord Guarantee Program, which Boston adopted. We worked directly with small landlords to provide them with tenants who have access to all the services they need, be it a therapist, a voucher, et cetera. We were essentially creating a match program. I think looking at different forms of housing is another strategy. We have adopted the Accessory Dwelling Unit Program, which I think Cambridge actually passed as an ordinance to create basement apartments. I think this is also going to be very helpful for Boston to examine — are we really using all the units that are available within the home? There’s also the option to look at short-term rentals. I think we’ve looked at other cities to see what they’ve done, what’s worked and what hasn’t, in order to make sure we are also pushing an agenda that favors long term residents over short-term residents.

Do you think Boston should be considering rent control?

Sometimes. I feel like the whole topic takes up so much oxygen that it is almost the only thing we can focus on, and that’s what I find frustrating about even talking about it. I really think right now, we need to be thinking about our standards for building. Since we’re in a building boom, in a good economy, the time is now to really raise our IDP [Inclusionary Development Policy], which is the percentage of units that are supposed to be affordable. Cambridge and, I believe Somerville as well, are at 20 percent, while Boston only requires 13 percent. We need to look at how we dispose of city land and we need to help create more land trusts and foster community ownership. I think that’s where the conversation is moving, and the city could, without a huge controversial ballot initiative, just change how we operate right now, in order to get land to the community and require developers to do more.