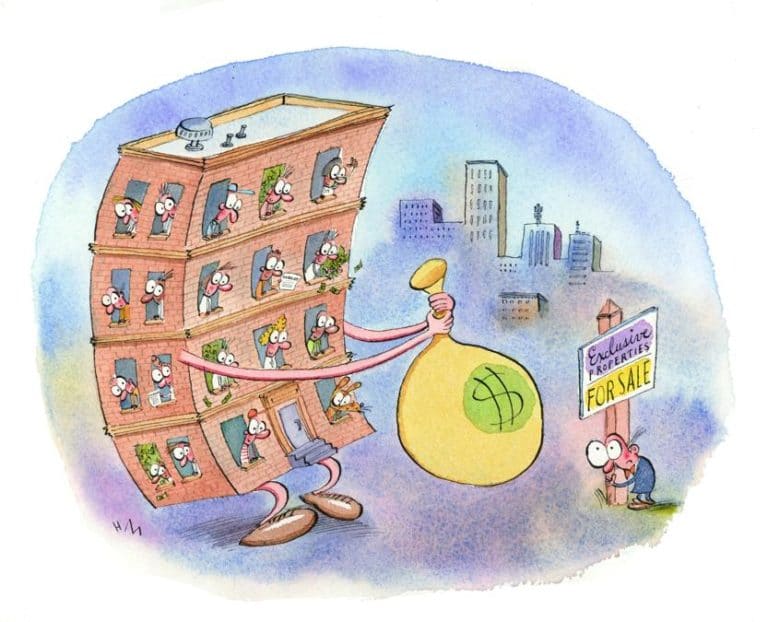 
As older, reasonably priced apartments get spruced up and become more expensive, in quickly changing places like Somerville, residents are often left with an unpleasant dilemma — move out of town to find an affordable alternative or pay much higher rents to stay in their homes.

Now, policy makers in Somerville are looking at an unusual proposal that might give residentsa better shot at staying in their homes when a rental property changes hands. The city is considering a measure giving tenants the option to buy their buildings before anyone else can.

The change would amount to a significant new limit on the rights of property owners, and it has already attracted fervent opposition from landlords. But in a region where housing affordability is a key economic constraint, advocates say it’s time to get creative.

“Do we want to live in a city where you can get pushed around as a tenant from neighborhood to neighborhood farther out from where you used to live?’’ said David Tisel, a Somerville resident who became a vocal supporter of rental reform while working on an urban studies graduate degree at MIT.

He said the rights of property owners “have to be balanced with other considerations for human rights.’’

Tisel argues that it’s no longer enough to build new low-cost units, but that governments should also look at finding new ways to help people stay where they are.

Fundamentally, “right of refusal’’ laws give tenants the ability to match an offer for the property where they live.

That could take a form of tenants’ groups banding together to buy large buildings, potentially with public or nonprofit assistance, or people purchasing the standalone homes that they rent, according to a draft version of the ordinance.

Such measures have been tried elsewhere with uneven results. A Washington, D.C., ordinance that has been in place for decades gets credit from some for keeping a semblance of ethnic and socioeconomic diversity in gentrifying neighborhoods.

But recent news reports have found that the law can be used by unscrupulous tenants to hold up sales and extract payments even when they have no intention of buying.

Those reports could not have come at a worse time for those promoting similar laws around Massachusetts. The Cambridge City Council recently shot down a measure that would have opened the door for a right-of-refusal law, as opponents cited shortcomings of the D.C. law in arguments against the local measure.

Meanwhile, the city of Boston so far has little to show for a yearslong debate over rental reform.

Among the most vocal opponents are the members of the Small Property Owners Association, which was the driving force behind the successful referendum to repeal state rent-control laws in 1994.

Richard Parritz, president of the association, said most landlords are likely to consult their tenants when selling a building.

Parritz said he has not seen any evidence that a first-refusal bill would solve the problem of housing affordability.

He said local governments should look for problem cases and “manage them specifically by name.’’

“We don’t use outliers to make broad-brush policies,’’ Parritz said. Property owners are also concerned that even renters operating in good faith to buy their units could slow sale processes to a crawl.

Somerville, like other communities in the inner core of Greater Boston, is becoming demonstrably harder for renters to afford. A 2015 study conducted for Somerville found that nearly three-quarters of the renters in the city would be unable to pay current market rates. The report calculated the average rental cost at $2,384.

Many people believe this crunch will necessarily lead to the displacement of lower-income people, and they argue that Somerville is especially vulnerable given the expected rise in rents around the stations that will open with the extension of the MBTA’s Green Line.

That disruption, in turn, could lead to changeover in rental units — and make a rental-refusal ordinance necessary in the eyes of some advocates.

But there is little data available to determine whether the affordability concerns have led to a shift in the demographics of the city. City officials say they are seeing signs in school attendance, requests for housing assistance, and statistics on condo conversions.

The discussion in Somerville has already been several years in the making. A task force on housing affordability commissioned by Mayor Joseph A. Curtatone suggested the right-of-first-refusal proposal as one of several measures that could help control costs.

“We’re trying to not just preserve affordable housing, but build up community and preserve the character, the fabric of our neighborhoods — allow people a real opportunity … to buy a home, and stay in the community that they love,’’ Curtatone said in an interview.

Alderman Mark Niedergang, who was cochairman of the task force, said the proposals are meant to deal with a problem that many other cities would love to have: “Everyone wants to live here, so it seems.’’

“That is by far the biggest issue in the city right now, amongst people of all backgrounds,’’ Niedergang said. “Maybe not wealthy people but everyone else.’’

Reform efforts appear to have gotten a boost in last year’s election, where an already-Democratic Board of Aldermen swung further to the left as voters selected several candidates ideologically aligned with Bernie Sanders.

This year, Niedergang said he hopes to push forward several issues on affordability. The board recently advanced a measure that would require most property buyers and sellers to pay the city a transfer fee of 1 percent apiece.

That measure, like many others having to do with property sales, requires the sign-off of the state Legislature. The proposal is intended to create a pot of money for efforts that could include an assistance program for renters groups who try to buy their properties.

He said it’s unlikely that a right-of-refusal bill will pass before the fall, but he said he believes the proposal will be able to head off some of the problems experienced in Washington. The city plans to exempt owner-occupied buildings with three or fewer units, streamline sales among family members, and require tenants to move quickly to show that they are serious about making a deal.

That could help people like Charline Lake, who left her $1,100-a-month apartment on Orchard Street after a new landlord started fixing up her building and laid plans to double her rent. She wound up in Arlington Center — the closest place she could afford.

Lake, whose retirement income was too high for her to qualify for public housing, but too low for her to move anywhere else in town, said she and her fellow tenants would have given serious consideration to buying their apartment building if given the option.

“We would have been idiots,’’ she said, making reference to its condition before the sale. “But we would have done it in a heartbeat because we loved it there.’’

Andy Rosen can be reached at andrew.rosen@globe.com. Subscribe to the Globe’s free real estate newsletter — our weekly digest on buying, selling, and design — at pages.email.bostonglobe.com/AddressSignUp.