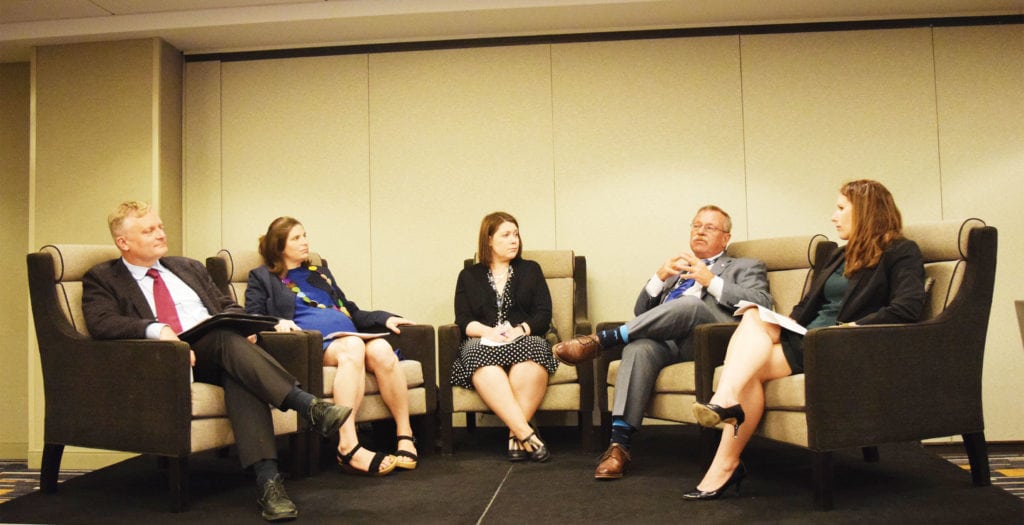 Discussing their role in each pilot program were William Christopher Jr., commissioner of the city’s Department of Inspectional Services; David Leonard, president of the Boston Public Library; Corey Zehngebot, senior designer for the Boston Planning and Development Agency; and Emily Shea, the city’s commissioner for Affairs of the Elderly.

Marcy Ostberg, director of the iLab, moderated the panel discussion.

“Boston is experiencing a huge population growth and it’s become harder for middle-income residents especially, to stay in Boston,” she said. “We’re trying to find solutions.”

The iLab is a collaboration between the Department of New Urban Mechanics and Department of Neighborhood Development. According to Ostberg, it blends technology, people-centered solutions, collaborators and a spirit of experimentation to find new ways of developing, funding and designing housing differently.

Mayors from across the state and country, local developers and city employees attended the event.

Christopher spoke about the iLab’s Accessory Dwelling Units pilot program in Jamaica Plain, Mattapan and East Boston. “We’re thinking of ways to increase units without changing the character of the neighborhood,” he said.

According to Christopher, accessory dwelling units are when owner-occupants carve out spaces within their homes for smaller independent rental units. Whether they are located in a basement or attic, “they have to meet building codes and align with the same fabric of housing most neighborhoods are used to. It’s not about actually putting additions on units,” he said.

Shea shared her work with the Intergenerational Homeshare pilot in which, through an application process, eight older adults in Boston were matched with graduate students to live in their spare rooms. It is a sustainable and affordable method for the students, and the elderly can gain additional income.

Zehngebot introduced the idea of compact living as “a new type of living with an efficient use of space and “something we’re now seeing developers propose on the market.”

A significant part of the pilot would be to explore how to reduce parking ratios that usually drive up construction and development costs. “We’re looking to reduce costs, and parking spots associated with units are usually built into the cost of constructing that unit. We’re considering bike parking or transit passes as alternatives.”

Leonard spoke about the Housing with Public Assets pilot, which is currently in the Request for Information stage.

The idea entails adding affordable housing to city-owned assets such as libraries or fire stations, either on top of each site or next to it. The idea calls for mixed-use development while simultaneously renovating the public asset.

The RFI process identified 26 public library branch locations in Boston, as well as fire stations and parks, for a total of 82 city properties for developers to consider.

According to Leonard, there are 24 responses to the RFI so far, and in one of them a group of residents partnered with a developer to submit an idea.

When asked by an attendee how exactly these types of units would make housing more affordable for residents, Ostberg said, “Compact living units, these are naturally more affordable because of the cheaper development costs. Additional Dwelling Units and Intergenerational Homeshares are coming in below-market rates. They do not command the same rents as regular market-rate units.”

Zehngebot added, “These things alone will not solve gentrification. But the way housing is currently built is too expensive. Affordability is the overarching goal. This is another avenue to homeownership opportunities.”

Christopher said one of the main challenges for these pilot programs is navigating the city’s zoning codes, which are rigidly defined and demands a lengthy process.

“It’s not normal for us at ISD to think outside the box with zoning,” he said.

The panelists said that the issue of parking, contentious among residents, is another challenge to consider.

“There’s pushback on the less-parking-spaces idea, but now we have real examples that are working,” said Christopher while naming a new residential building next to Ashmont Station that has 50 to 60 units and only eight parking spaces. “We think it could work.”

Zehngebot said, “We’re considering more transit-oriented development, close to the T. We’re well served by public transit and we need to be leveraging that.”

The panelists emphasized that the ideas were only at the conceptual exploration stage.

“It’s an imperfect experiment. And we are clear that it is an experiment, or else reaction can be reflexively negative,” said Zehngebot.

Ostberg told attendees that the Housing Innovation Lab is open to considering any new ideas and welcomes visitors during office hours.