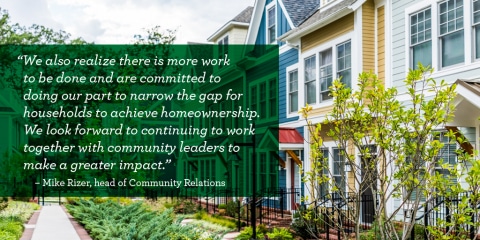 SAN FRANCISCO--(BUSINESS WIRE)--Wells Fargo and Company (NYSE: WFC) today announced more than 50 grants awarded to nonprofits across the U.S. to promote housing equality for low- to middle-income households in recognition of the 50th anniversary of the Fair Housing Act.

The 2018 Wells Fargo Housing Equality 50th Anniversary Grant Program honors fair housing community leaders, advocates, and nonprofits by contributing funding for projects, education and training programs and initiatives that highlight the work of those furthering housing equality in 2018, which marks 50 years since the Fair Housing Act was enacted. The Fair Housing Act provides for equal housing opportunities regardless of race, religion or national origin.

“With this grant program, Wells Fargo recognizes the instrumental leadership role housing equality advocates have in creating pathways to achieve affordable and sustainable homeownership for low-to middle income households,” said Mike Rizer, head of Community Relations with Wells Fargo. “We also realize there is more work to be done and are committed to doing our part to narrow the gap for households to achieve homeownership. We look forward to continuing to work together with community leaders to make a greater impact.”

In addition to the Housing Equality 50 program, Wells Fargo has a history of investment in innovative programs and initiatives focused on Advancing Homeownership℠ to bring growth, stability and sustainability to households and communities.

Wells Fargo & Company (NYSE: WFC) is a diversified, community-based financial services company with $1.9 trillion in assets. Wells Fargo’s vision is to satisfy our customers’ financial needs and help them succeed financially. Founded in 1852 and headquartered in San Francisco, Wells Fargo provides banking, investments, mortgage, and consumer and commercial finance through 8,200 locations, 13,000 ATMs, the internet (wellsfargo.com) and mobile banking, and has offices in 42 countries and territories to support customers who conduct business in the global economy. With approximately 265,000 team members, Wells Fargo serves one in three households in the United States. Wells Fargo & Company was ranked No. 26 on Fortune’s 2018 rankings of America’s largest corporations. News, insights and perspectives from Wells Fargo are also available at Wells Fargo Stories.