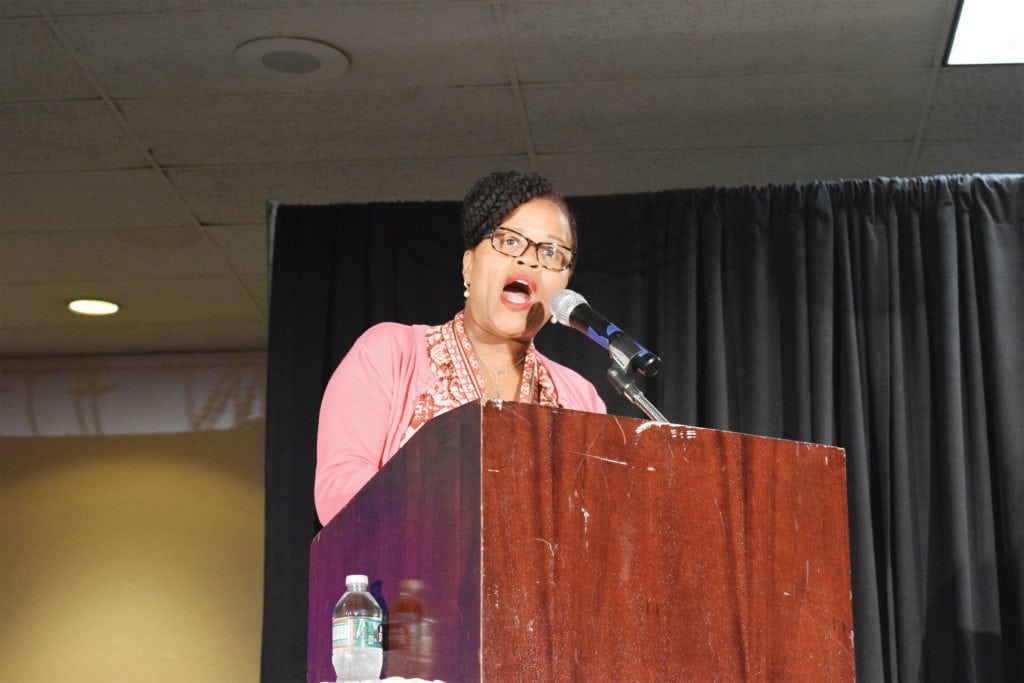 A coalition of housing advocates, grassroots and faith organizations, elected officials and aspiring homebuyers launched a campaign last week to create 1,000 affordable homes over the next five years in Boston through resources from developers and private institutions.

Sponsored by the Massachusetts Affordable Housing Alliance, Greater Boston Interfaith Organization and the Boston Teachers Union, the campaign is calling for the city to devote $40 million each year to affordable homeownership opportunities.

“We are in crisis. We’re fighting for the opportunity to have the safety and security only homeownership can provide,” said Acia Adams-Heath, a MAHA board member, to a crowd of more than 300 people at the Boston Teachers Union Hall in Dorchester last Tuesday. “[We are fighting] for the knowledge that we have roots, that we cannot be pushed out of our homes and neighborhoods by rent hikes or the sale of our apartments.”

MAHA members and their partners said that the $40 million would come from the city’s current Community Preservation Act fund, from doubling the required fees that downtown office and luxury apartment developers pay to the CPA fund and from universities, hospitals and other nonprofit institutions that do not pay city property taxes.

In 2016, 74 percent of Boston residents voted “yes” to pass the CPA, which creates an annual fund of $20 million through a 1 percent surcharge on residential and business property tax bills.

The CPA fund is designated for affordable housing, historic preservation and open space or public recreation.

The homeownership campaign members, such as Jonathan Rodrigues, organizer for BTU, want local universities to contribute to the Payment in Lieu of Tax (PILOT) program, a city program that has accepted voluntary payments from Boston’s major schools, hospitals and cultural institutions since 2012.

“About $60 million since 2012 has gone uncollected from these institutions,” said Rodrigues. “It’s time we demand from these wealthy institutions … with their glowing, shiny libraries, when we can’t afford librarians at our public schools.”

He added, “They have a responsibility to our city to grow with us, not on us.”

Edwards said she is co-hosting an upcoming public hearing with Essaibi-George on the PILOT program and that she “will do everything I can to make sure we have 1,000 new homeowners, and that those homeowners look like this room” in terms of diversity.

She also said she is looking at increasing community land trust opportunities to ensure permanent affordability for residents in those communities.

Campbell said although she supports the campaign’s goal of 1,000 affordable homes in the next five years, “I frankly think the timeline is too long. We don’t have five years.”

She said she supports housing vouchers as another solution and is currently leading an effort to get Compass Working Capital, a nonprofit financial services organization, to partner with the Boston Housing Authority to increase homeownership.

O’Malley said that having affordable homeownership opportunities is about “dignity and respect,” and Flaherty said he will continue to stand up for residents against displacement, as he has done by supporting the city’s inclusionary development policy and CPA.

Janey told the crowd that in her district, which includes Roxbury and parts of the South End, Dorchester and Fenway, “It is only 18 percent owner-occupied. This is why we’re so vulnerable to displacement, because not enough of us own in our communities.”

Sheila Dillon, Mayor Martin Walsh’s chief of housing and director of neighborhood development, also attended the homeownership rally to show the city’s willingness to work with the campaign.

“We are concerned about what’s happening in Boston. We want to change things and make sure anyone who wants to live in Boston can buy a home. You have our commitment,” said Dillon.

She continued, “Since 2014, we have permitted and constructed 438 units of affordable homeownership, and it’s not enough, but it’s a good start. We have another 438 units in the pipeline.”

Dillon said the city has also helped about 400 families with down payment assistance for their first home.

At the rally, MAHA members identified potential sites where the city should develop affordable homes: Glover’s Corner and the Columbia Point area, including the Bayside Exhibition Center, owned by UMass Boston.

Adams-Heath said that although more than 850 people graduate from MAHA’s homeownership classes every year, it has become increasingly difficult for them to find affordable options.

A 2015 study published by the Federal Reserve Bank of Boston, “The Color of Wealth in Boston,” found that close to 80 percent of whites own a home in Boston, whereas only one-third of U.S. blacks, less than one-fifth of Dominicans and Puerto Ricans and only half of Caribbean blacks are homeowners.

Symone Crawford, president of the MAHA board, said, “Nothing compares to walking to your front door, putting the key in the lock and turning it every single day, knowing it belongs to you.”