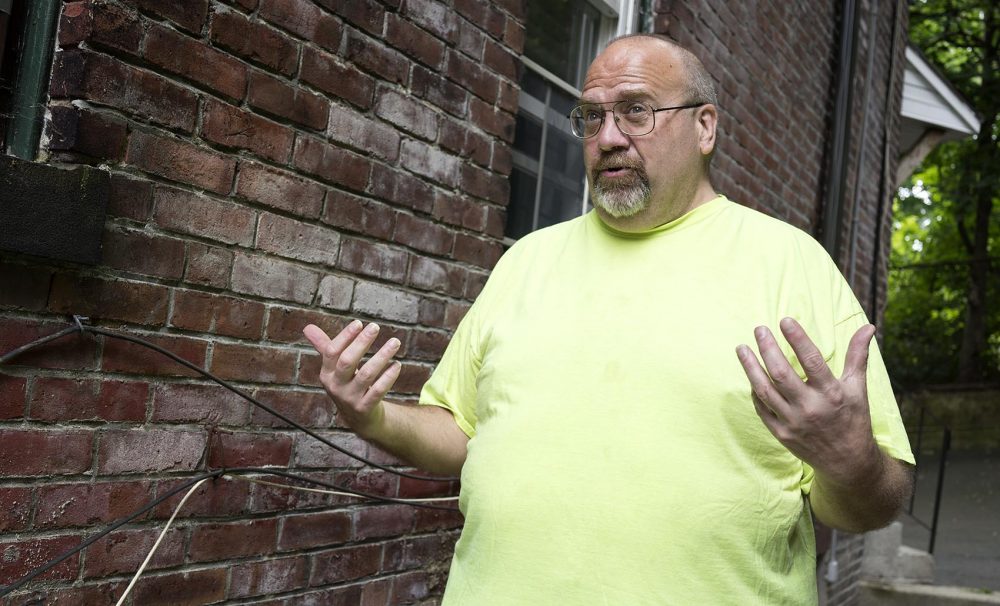 
Chuck Gyukeri is a Navy vet who was homeless back in 2009, and has been living in subsidized apartments ever since. Now supported by disability benefits and Section 8 vouchers, he lives in a small, street-level apartment on the back corner of a handsome brownstone near Fields Corner, in Boston's Dorchester neighborhood.

The inside of the Waldeck buildings need work, Gyukeri says, swatting flies around his head, but he’s grateful to have his own place.

"I know I got someplace stable now," Gyukeri says, standing outside the apartment he’s lived in for the last three years, his two cats slinking around behind the building with a third from the neighborhood. "I don’t have to worry about being out homeless again.

"It makes me feel comfortable about myself," he adds, "that I'm able to come in and out of my own home. And I’m getting my health issues together."

Gyukeri's apartment is in one of four brownstones on Waldeck Street — 35 units that came close to losing their affordable status. Gyukeri was part of a tenant organizing campaign that resulted in the complex coming under the ownership of Codman Square Neighborhood Development Corp.

Conditions were so bad under the previous owner, Codman NDC officials say, that the tenants had more than $3 million in claims against him relating to negligence of the building. In exchange for dropping their complaints, a bankruptcy judge granted ownership of the Waldeck complex -- and the Orlando development in Mattapan -- to Codman NDC.

Now the 59 affordable units at the Waldeck and the Orlando have been preserved, but Codman NDC says there’s a long way to go before they’re even up to code.

“It’s a little roach-infested right now, I’m trying to handle that,” says Gyukeri, managing to keep a smile despite an overwhelming odor permeating his apartment. “The weird thing is that something died. It might’ve been a mouse.”

A third of the units in Waldeck are uninhabitable, according to Codman NDC. But now, thanks to an $800,000 investment from Boston Medical Center, Codman says it wants to turn the row of downtrodden buildings into a paragon of well-being.

"Only about 10 to 20 percent of health is actually determined by what type of health care you get," says Dr. Megan Sandel, one of the leaders of BMC’s housing initiative. "Much more [significant are] the social determinants of health -- where you live, what your environment is like. And so more and more we're starting to screen for people's social determinants."

Waldeck represents one of nine investments for BMC -- a total of $6.5 million the hospital has designated for housing in some of Boston’s poorest areas. Advocates say BMC’s investment is part of a burgeoning shift among health care leaders to view housing as a key “social determinant of health."

Now, a handful of area hospitals are starting to put their money into housing.

BMC’s housing investment is tied to a renovation of its campus in the South End. The state requires that 5 percent of the cost of a hospital expansion be reinvested in community health. BMC chose to spend the money on housing.

The initiative also includes $1 million to help families fight evictions, $1 million to create a housing stabilization program for people with complex medical issues, and $1 million to support a grocery store at a development in Roxbury.

Sandel says there was little resistance among BMC officials to investing in housing, but it’s an experiment that still needs to be proven.

“I think where people need to be convinced is in the business model. Can we actually show that this is something that's going to reduce costs and improve health outcomes?” Sandel says, adding that it has to make sense for BMC's bottom line.

BMC is not the only hospital in Massachusetts looking to improve health by improving housing. Boston Children’s Hospital recently set aside $5 million, while Baystate Medical Center in Springfield is also dedicating funds to housing.

In a statement, a spokesperson for Massachusetts General Hospital said MGH, Partners HealthCare and Brigham Health are looking at possible investments to benefit local underserved communities.

John Erwin is executive director of the Conference of Boston Teaching Hospitals, which is heading up a community needs assessment of Boston’s health care institutions that will conclude in 2019. Erwin says housing could be identified as a major social determinant of health that requires collective action from the city’s hospitals, health centers and nonprofits.

And Erwin says it’s not just about housing the poor: “We’re seeing it from the patient perspective but also as large employers in the city. It’s increasingly difficult for our own employees to find affordable housing in the city -- and when you’re trying to attract workers from other parts of the country, housing becomes a factor.”

Getting health care leaders onto the housing bandwagon could make a big difference politically, says Joe Kreisberg, head of the Massachusetts Association of Community Development Corporations.

Kreisberg estimates Massachusetts spends about 40 percent of its money on health care, and 1 percent on housing. If health care leaders start speaking out about the need for more and better housing, he says that could help change the ratio in the long term.

But residents at the Waldeck development in Dorchester say change can’t come fast enough. They admit things have improved since Codman NDC took over -- it actually maintains the building and responds to repair requests — but the tenants are ready for an end to the pest infestation and drug use.

“It’s kind of hard, you wake up in the morning and there’s someone on your hallway,” says Derrick Farley, who's lived at Waldeck since the beginning of the year.

Farley says sometimes it falls to him to kick drug users out of the building.

Farley says he doesn't want to continue living at Waldeck the way it is now. "But what they’ve given me, a picture of the future, it looks like it could be better.”

Beyond the finances, it’s still unclear what kind of role hospitals could have in housing. At Waldeck, advocates are still working out important questions: Will there be a clinician onsite? Will fair housing law permit patients from certain hospitals to get to the front of the housing wait list? And what kind of assistance will be available to the residents, many of whom struggle with substances and mental health issues?