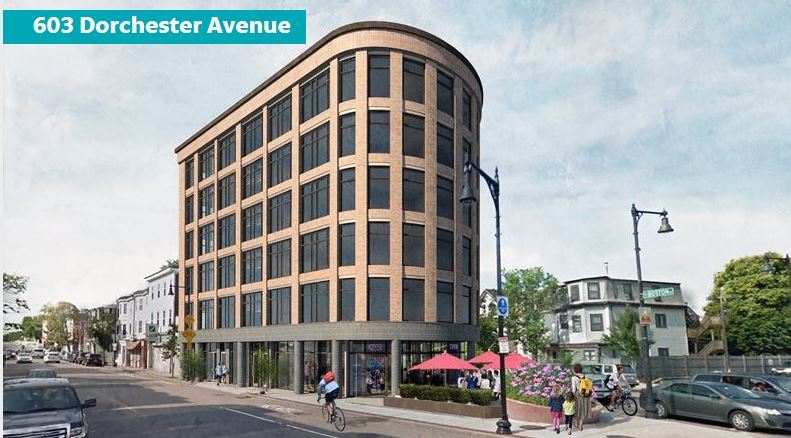 BOSTON–The Boston Planning & Development Agency (BPDA) Board of Directors approved four development projects and three Notices of Project Changes at the June meeting. The projects will generate a total of 252 residential units, 40 of which will be affordable. In addition, the projects will create over 1,900 jobs upon their completion.

The BPDA continues to make progress towards Mayor Martin J. Walsh’s goal of increasing affordable housing to support a strong middle-class. Since the start of 2018, 2,908 new housing units have been approved, with 585 affordable units for low or middle-income residents.

In addition, the Board approved a new Smart Utilities Policy ensuring that new large developments are taking steps to create a more resilient city, and an eight percent increase to linkage fees paid by developers, as part of continuing efforts to increase funding for affordable housing and job training. The linkage increase must also be approved by the Boston Zoning Commission.

Located at 603 Dorchester Avenue in South Boston’s Andrew Square, the project site is approximately 4,074 square feet of land, currently occupied by a two-story building and parking lot. The new building will be constructed as a six-story, mixed-use building with 24 residential units, four of which will be Inclusionary Development Policy (IDP) units. There will be a mix of 22 one-bedroom units and two studio units. The ground floor will consist of 2,012 square feet of commercial retail space for new restaurant use and the project will also include a communal space for residents that is approximately 800 square feet.

This proposal includes the construction of 29 single-family homes on the extension of Willet Street in West Roxbury, with a new street and new associated infrastructure. The proposed project totals 75,400 gross square feet with the average size of each home averaging 2,600 square feet. Each individual home lot will occupy a minimum of 6,000 square feet. Each of the 29 homes will be family-sized residences with multiple bedrooms and off-street parking. Vehicular access to and from the project site will be provided via a connection between the new street and the existing Willet Street. Additionally, a partial pedestrian connection to Washington Street will be available from the eastern corner of the site.

As proposed, the project will result in a number of public benefits for the West Roxbury neighborhood and the City of Boston as a whole. These benefits include public realm and infrastructure installments including trees, landscaping, sidewalks, and streetscape amenities, as well as mitigation valued at $80K in collaboration with City agencies, toward the construction of public and pedestrian connections and the design of a minimum of four traffic calming measures on streets neighboring the project site.

1950 Washington Street will renovate the existing structure into a six-story structure containing 31 residential homeownership units, four of which will be income-restricted. The site is located on the corner of Washington and Thorndike Streets in Roxbury, directly across from Ramsay Park, and is served by the MBTA’s Silver Line.

5 Washington Street will bring a five-story residential building with 108 rental units and 12,500 square feet of ground floor retail to Brighton. In response to community feedback, the project increased the proposed number of affordable units. Eighteen units will be income-restricted, represented 16.4 percent of the total project. The project will set aside 1,000 square feet of retail for a local business at a discounted rate.

The project will include 104 parking spaces, secured storage for 110 bicycles for residential use, four spaces for retail use, and outdoor spaces for visitor use. 5 Washington Street is adjacent to several public transportation opportunities, including the MBTA’s #65 bus line, as well as the B and C Green Lines.

In addition to further activating a busy intersection in Brighton, the project will provide an improved streetscape and lighting, a new outdoor space with benches and landscape that is open to the community.

Phase III of Hub on Causeway, previously known as the Boston Garden Project, is moving forward with a Notice of Project Change (NPC) that will update the office design, responding to a new generation of office and workforce needs. The updates include the flexibility to accommodate future changes of the building’s tenants.

The project, located on 80 Causeway, was originally approved in 2013 and is currently under construction at the former site of the Boston Garden, adjacent to TD North and North Station.

The approved changes include: higher floor to floor heights, floors with increased ceiling heights, enclosed two story balconies in certain portions of the office tower, outdoor terraces on specific levels of the office tower, a higher occupiable floor above the project’s podium and larger maximum floor plates and office height tower from grade.

This will result in an increase in the overall office/cultural/community area and a reduction of overall residential area, but not residential units. As under the second amendment, the remainder of the 63 Melcher Street basement space will be absorbed into utility, entry, and lobby areas for primary residential use of the building.

In April 2018 a Notice of Project Change was submitted to the BPDA to revise the originally approved project. The following changes were proposed to and approved by the BPDA Board:

As a result of these proposed changes, the development will now consist of the construction of a three-story mixed-use building, including the above. Additionally, the project will be energy positive in its design with a projected energy surplus of 21 percent. This will be achieved through sustainable design of the building including geothermal heating systems, water filtration systems and 14,500 square foot solar farm on the roof.