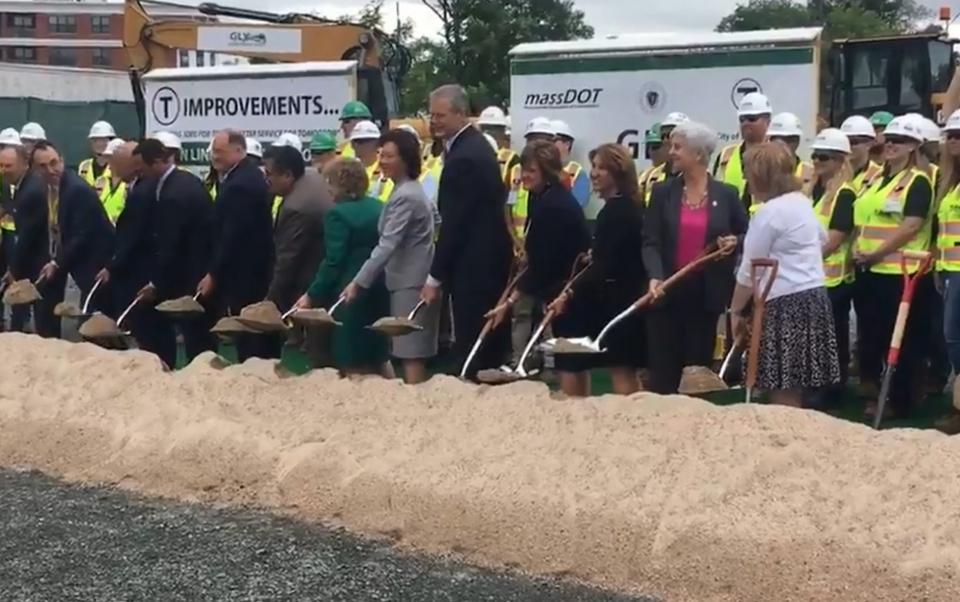 
How will Medford address the growing cost of living that may be exacerbated by the Green Line?

A 2014 report by the Massachusetts Area Planning Council predicted that rents near the new Green Line Extension T stops in Somerville could increase by approximately 25 to 67 percent by 2029.

There’s no similar, existing study about the GLX’s projected economic impacts in Medford, though officials know that rents and property values will continue to increase in the areas near the new T stops in Medford. But they don’t know by exactly how much.

“We know in other neighborhoods that when there’s increased access [to] a T stop, especially right near the stop, there’s an increase in housing costs,” Rep. Christine Barber said. “But we also know there’s been a lot of increases in housing costs in the greater Boston area, even in areas that are not well-served by transit.”

The GLX officially broke ground on June 25, with seven stations expected to open in 2021. Only one is located in Medford – the College Avenue stop – but two others at Ball Square and Lowell Street border the South Medford neighborhood. An eighth stop is planned for the intersection of Route 16 and Boston Avenue, though it is still unclear when that station would open.

Milorin fears the neighborhood change could be of a similar magnitude to the rapid gentrification of Davis Square following the extension of the Red Line to that part of Somerville.

“By bringing the extension to Route 16, we’ll increase the value of houses around here and a lot of people will be displaced, as my old friends [were] in Davis Square,” Milorin said.

But Barber sees the GLX as only one factor contributing to the ever-growing cost of living in the Boston area. And while rising rents and property values may be an unfortunate side effect of the new T stops, the GLX will help with another regional problem: job access.

“There’s not enough housing [and] not enough access to jobs in the region,” Barber said. “It’s a regional problem that’s already happening in Medford.”

According to the city’s Director of Community Development Lauren DiLorenzo, gentrification and neighborhood change associated with the GLX could be less pronounced than it was when the Red Line extended, since Medford has fewer vacant properties and underutilized space than West Somerville did when the Davis station opened in 1984.

This could also reduce the likelihood that South Medford and Hillside will become ripe for redevelopment into condominiums or luxury apartments, DiLorenzo added.

“Medford has a strong neighborhood character in the South Medford and Hillside areas,” she said. “We certainly would want to preserve that character.”

In anticipation of the GLX, local and state officials as well as community members have been discussing ways to keep the surrounding neighborhoods affordable for those who live there now.

Residents will not be the only ones impacted. A 2012 MAPC report on the GLX notes that business owners facing rising rents or taxes may also find themselves displaced.

“Somerville and Medford should develop a policy that any new mixed-use development agreement require developers to set aside at least 10 percent of all retail spaces for locally-owned small businesses,” the report suggests.

South Medford resident and community activist Jim Silva is a strong advocate for the GLX – provided that there is sufficient community and business involvement throughout the process and that policies are implemented to mitigate its potential negative impacts.

“There’s a value in having that proximity to public transportation, but how we manage this as a community is really important and significant,” Silva said. “Indecisiveness could impact this community adversely.”

The founder of South Medford Residents Together (SMRTO), Silva has a long wish-list for policies that could reduce the negative impacts of the GLX when it comes to affordability, traffic and preservation of a community feel in South Medford. Some of those policy proposals come from residents he has spoken to through his outreach efforts as a member of the GLX Community Working Group in Medford.

For example, Silva cautions that when the Green Line comes to Ball Square and Lowell Street, it could increase the demand for parking in South Medford. That’s why he would like to see a resident-only parking system implemented on all streets in the neighborhood.

“The city hasn’t implemented resident parking even though SMRTO has been working on it for over nine years,” he said. “We’ve had the workshops, we’ve gone through the process, but nobody seems to be making those decisions.”

Silva also worries about the ongoing issue of over-renting properties to more people than can be accommodated in a given home. Though no more than three unrelated people can legally live in a home together in Medford, Silva said this practice is rampant in South Medford.

With the GLX projected to increase the demand for housing in the area, over-renting could become even more pronounced.

“That issue in particular could be problematic,” he said.

Additionally, Silva is concerned about a growing practice whereby speculators buy properties with no intention of living in them, which he feels harms the neighborhood character and exacerbates the housing crisis. That’s why he’d like to see the city offer a real estate tax break – an economic incentive – for homeowners who actually live in the property they own in Medford.

“The community needs to ... get together, to ensure that people have affordable housing, to ensure there is accessibility to the housing stock here and that it doesn’t turn into people who are coming in and just buying properties, short-term rentals, that kind of thing,” Silva said.

Many public officials, for their part, say that it is largely too early to predict exactly how the GLX will affect its surrounding neighborhoods – and that rising rents and property taxes are inevitable with or without the Green Line.

“What we’re going to be faced with now is market-driven; whether or not the GLX is here or not, we’ve seen major increases in property values in the city,” City Council Vice President Fred Dello Russo Jr. said.

Dello Russo, a member of the GLX Working Group, believes that increasing the supply of affordable housing, especially through funds from the Community Preservation Act, will address the growing demand for affordable housing.

He noted that the City Council recently approved one CPA project to convert the former St. Clement’s School – located a few blocks from the anticipated College Avenue station – into over a dozen affordable housing units for seniors and people with special needs.

DiLorenzo agrees that growing both the affordable and market-rate supply of housing in Medford could help stabilize the cost of renting or buying a home. She added that Gov. Charlie Baker has similarly advocated for more housing growth to address the regional housing crisis and has taken steps to encourage municipalities to make it easier to build multi-family homes.

“We’ll be concerned to make sure there’s some affordable housing whenever there’s new housing that will be built, and hopefully property owners will maintain affordable rents for tenants,” DiLorenzo said.

On the whole, both DiLorenzo and Dello Russo expressed enthusiasm for the GLX, though they recognize that the project could exacerbate certain challenges in Medford’s impacted neighborhoods – starting with the construction phase happening now. On the immediate horizon, the Broadway bridge in Somerville will close for one year beginning in November, which will increase congestion in the South Medford neighborhood.

“It’s going to get dicey,” Dello Russo said. “People’s daily lives are going to be changed in one way [or another] significantly.”