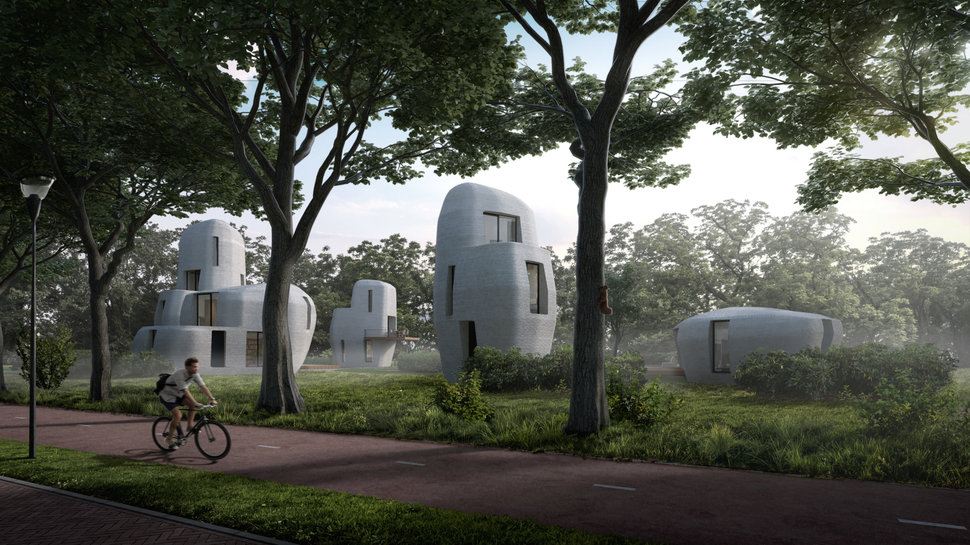 
An unassuming field in the Dutch city of Eindhoven is the planned location of the world’s first habitable cluster of 3D-printed concrete homes. By 2023, planners say, five hulking gray shapes will loom against the sky there like the rocks of Stonehenge, with the first building set to be completed mid-2019.

The endeavor, called “Project Milestone,” is a collaboration between the Eindhoven University of Technology (TU/e), the municipality of Eindhoven and four companies. To construct the homes, the project will use a 3D printer, which looks like a giant icing kit, to squirt layer upon layer of concrete to make the curved walls of the five buildings ― working first in the university lab and then, if the technique can be stabilized for Dutch wet weather conditions, on-site in the Meerhoven district of the city.

The designs are the shape of a new technology that some experts believe could ultimately transform house construction, using a quicker, cheaper and less environmentally costly process. In the Netherlands and beyond, affordable housing is an increasingly pressing issue, even as the building trade is booming: The World Resources Institute estimates that 1.6 billion people in cities around the world will lack access to an affordable and secure home by 2025 ― 30 percent more than now.

Although the Dutch homes are to be rented out on the free market, Theo Salet, a concrete technology professor at the TU/e, is convinced that his methods could be a game changer in terms of building better, cheaper social housing.

“The mass customization that is possible with this technology democratizes things like architecture and design,” Salet said, noting that the computer can print any shape for the same price. He wants this tech to be used to improve low-cost housing. “All of a sudden,” he said, “appealing architecture is within reach.”

The team has spent €650,000 (about $763,000) on the project so far, including the cost of the printer and a researcher. Salet says the actual costs of building each house are separate from this sum, though he doesn’t have the figures yet.

The university claims that 3D printing could also be more sustainable than traditional construction ― concrete production accounts for 5 percent of greenhouse gas emissions worldwide ― by using only the material that is structurally necessary, and in freer, faster-setting forms.

It’s hard to assess these claims as the technology is developing, according to Dr. Chris Goodier, a senior lecturer at Loughborough University’s School of Architecture, Building and Civil Engineering in the United Kingdom. He said 3D printed homes could be more sustainable, although the concrete used for printing is generally fairly cement rich, which means it could have a higher carbon footprint.

“I see the advantage of 3D printed homes being in the innovative structural shapes being possible, rather than them being more sustainable,” Goodier said. “This, however, may change in the future as the technology, and material mix design technology, develops.”

As with any new and relatively untested technology, there are issues to iron out. Yasin Torunoğlu, deputy mayor in charge of living, districts and participation in Eindhoven, is enthusiastic about the role this technology can play in helping the Netherlands build the 700,000 new homes it needs by 2025. But he says there are challenges around developing building and safety checks.

“We don’t have any rules for a 3D printer,” he said. “Who should check the safety or give permissions? For us there’s a whole learning process as government.”

So can this 3D-concrete printing technique revolutionize housing ― in some places, at least? Or are these innovators building castles in the air?

Eindhoven’s project is one of many experiments across the world. In 2014, the Chinese company Winsun released images of model houses, printed in concrete, at its factory site. Winsun claimed the houses could be produced for less than $5,000 apiece. It has since used the technique to help build an office building in Dubai.

The technique could be applied in crisis housing, too. The American company Icon unveiled a 3D-printed concrete model home in Texas earlier this year, and claims its “Vulcan” printer can print a home in 24 hours for less than $4,000.

Working with the nonprofit New Story, Icon aims to use the technique in the developing world and ― if enough funding is raised ― to open the first printed community of homes in El Salvador next year.

Types of 3D printing are already being used in house construction. Earlier this month, a family moved into a 3D-printed, 1,022-square-foot home in Nantes, France. The house ― including the walls, made from polyurethane expansive foam and poured concrete ― was completed within four months, at a cost of €195,000 ($228,000).

Modern technologies that make house construction faster and cheaper can certainly help in countries like the U.S., says Marion McFadden, vice president of public policy at the Maryland-based affordable housing charity Enterprise Community Partners. The real issue, she says, is convincing governments to put any money at all into building homes.

“The nation’s production has not kept up over several decades, at a time when the population is growing,” McFadden said. “We have older housing lost to obsolescence and are seeing declining investment from government in creating supportive housing. We have a systemic problem and either wages need to be higher or government needs to help more by providing more funding.”

Land availability is an issue too, in rich countries as much as poorer ones. “The problems in Britain are the problems of finding land at all to build housing on ― whatever technology you use ― and the lack of subsidy for social housing,” said Michael Jones, a research associate at the Cambridge Centre for Housing Research and Planning in the U.K. “That makes it very difficult for any supplier to produce it at rents people can afford.”

He points out that sometimes, in places like San Francisco, there’s also NIMBY-type opposition to building from nearby residents.

There are even more challenges in developing countries, according to Katerina Bezgachina of Habitat for Humanity International, a global nonprofit working toward decent housing for the world’s poorest communities.

“3D printing, innovative construction materials like earth bricks in Africa, and a lot of innovation around bamboo construction in Asia are welcome technological breakthroughs, and making construction cheaper and more uniform is definitely a good step,” she said. “But unfortunately constructing houses isn’t only about building cheaper and faster. You need permits, access to land and [to overcome] administrative hurdles and corruption.”

Bezgachina points out that planning permission that might take as little as a week in some parts of Europe typically takes months in many African countries, while some land might be undocumented but passed across generations, so there could be a negotiation process over rights. “Let’s also campaign to change the way governments work in terms of land rights and access, and improve housing policies, ensure how people know how to document their land and write wills,” she said.

There are technical challenges to a smart computer printing on-site too, says Salet, who couldn’t get a recent print project to work in Dubai. “I brought this little robot and we printed with the same material, but it didn’t work because it was 45 [Celsius, or 113 Fahrenheit],” he said. “Concrete is a hydration process, so it reacts to temperature and gets stuck in the pump. Changes in ambient conditions are an issue.”

But other building specialists believe 3D-concrete printing machines could eventually save time and money, at least in some contexts.

Dr. Richard Buswell, a reader in building energy systems at Loughborough University, for example, believes 3D printing of concrete and other materials could have a profound effect on the construction world ― potentially reducing the need for labor, scaffolding and time on-site. “It is a disruptive technology,” he said. “I think it will have a significant impact on certain parts of the construction supply chain.”

HuffPost’s “This New World” series is funded by Partners for a New Economy and the Kendeda Fund. All content is editorially independent, with no influence or input from the foundations. If you have an idea or tip for the editorial series, send an email to thisnewworld@huffpost.com.