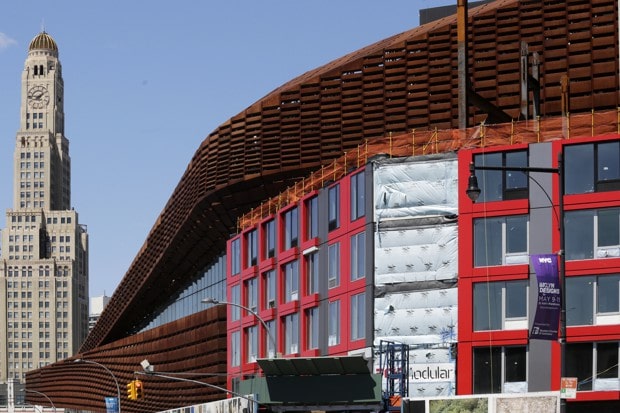 If you’ve hung around the CityLab site, sat through a City Council meeting, or hobnobbed with a housing developer, you’ve probably run across the term “inclusionary zoning.” You might even think you know what it means. But wait, do you? Don’t worry. We’ve got you covered. Welcome to the pilot edition of “CityLab University,” a resource for understanding some of the most important concepts related to cities and urban policy. If you like this feature, have constructive feedback, or would like to see a similar explainer on other topics, drop us a line at editors@citylab.com.

In Washington, D.C.’s rapidly gentrifying Petworth neighborhood, the recently opened Fahrenheit building could easily be seen as a symbol of the area’s increasing unaffordability. Its bright red exterior and ground-floor craft cider house send a powerful signal about the price of the apartments above, which range from $2,400 to $2,745 for a two-bedroom unit. But all is not as it seems. Three of the Fahrenheit’s 31 units are available at below market rates as part of the District’s inclusionary zoning (IZ) program, which, in fiscal year 2016, offered two-bedroom apartments for an average rent of $1,636.

In D.C. and around the country, inclusionary zoning (also sometimes called “inclusionary housing”), is an increasingly popular way to produce affordable housing through the private market. And while these programs only produce enough units for a lucky few low- and moderate-income households, they remain one of the main tools cities have for maintaining neighborhood diversity, and keeping high-opportunity areas affordable.

For city governments, the big appeal of IZ is the fact that it often requires little or no public subsidy. But if the affordable units IZ produces feel “free” to governments, they are anything but for the developers who produce them. Therein lies the rub: How much affordable housing can cities demand from private developers without making new housing construction economically infeasible? And even if cities can find the IZ sweet spot, will such policies ever produce enough affordable housing to make a dent in the need?

A growing number of cities, counties, and even a couple of states have decided inclusionary zoning is worth it, even as they acknowledge that such policies are hardly a solution to the housing crisis. In one building in San Francisco, for instance, 6,580 households applied for 95 affordable units that were partially funded by IZ policies.

But producing affordable housing is not IZ’s only goal. It was developed in the U.S. in the 1970s in response to the widespread trend of “exclusionary zoning” (also sometimes known as “snob zoning”), which includes zoning practices like mandating minimum lot sizes and other legal loopholes advocated by NIMBYs who seek to prevent the construction of affordable housing in their neighborhoods. In this way, IZ is a tool of desegregation, forcing wealthy people to live cheek-by-jowl with lower-income residents, and improving the latter’s prospects for upward mobility.

Inclusionary zoning requires or incentivizes private developers to designate a certain percentage of the units in a given project as below market rate (BMR)—cheaper than their value on the market, and often less than the price of producing them. (The large majority of IZ programs are mandatory—80 percent of them according to one study.) The proportion of BMR units a developer must build usually depends on the size of the project: In many cities, projects with fewer than ten units do not trigger IZ requirements, while projects with hundreds of units might have steeper requirements, proportionally, than a project with 50

What makes a unit “below market rate”?

The actual price of BMR units is usually determined based on the area median income (AMI). In some cases, a developer might be allowed to provide a greater number of middle-income units (for people earning 80 to 120 percent of the AMI), and a lower number of low-income units (for people earning less than 50 percent of the AMI), as the latter require a greater subsidy per unit. Because of this, IZ can be more effective for producing housing for middle-income households that are not served by other programs, like Section 8 vouchers, which are usually reserved for people earning less than 30 percent of AMI. Housing lotteries are generally held to determine who gets to occupy these affordable units.

How do IZ policies affect segregation?

IZ policies usually encourage developers to build their inclusionary units on site, which facilitates the class and race mixing that exclusionary zoning (i.e., segregation) prevented. (“Poor Doors”—or separate entryways reserved for lower-income residents—can be viewed as an attempt to retain a certain amount of segregation.) Developers might also have the option to build BMR units at another site, or contribute to an affordable housing fund, but these options are often more expensive. Whether inclusionary zoning policies have made a significant dent in overall housing segregation remains unclear—if only because these policies seldom generate neighborhood-changing numbers of units.

Why would developers volunteer to participate in inclusionary zoning?

In places where IZ is optional, it is often tied to density bonuses, meaning a developer can increase the size and unit count of its development beyond existing zoning, in exchange for producing affordable housing. Supporting and participating in IZ programs can also help developers strengthen community relations, and build good will, providing them greater leverage for future projects.

How popular are these policies?

IZ also appears to be gaining traction: In a survey of 273 inclusionary zoning programs, 70 percent were created after the year 2000, and the momentum is still going. New York City passed IZ in 2016, Wisconsin is currently considering a bill, and IZ was a major component of SB 827, California’s failed but widely touted transit density bill. However, IZ remains controversial, generating scorn from economists and lawsuits from developers.

Washington, D.C.: The District’s current IZ program went into effect in 2009, and the first BMR units became available in 2011. It only applies to residential projects of 10 units or more, and requires that 8 to 10 percent of the project square footage (not unit count) be designated as BMR housing. In exchange for compliance with this policy, developers can receive up to a 20 percent increase in density over the set zoning. The price of the BMR units is set to 80 percent of the area median income for for sale units, and 60 percent AMI for rental units. As in other cities, the lottery process for qualifying for an affordable unit is a complicated one, so the city requires interested households to attend an “IZ Orientation” class. For renters of IZ units, the District requires households to sign one-year leases, and to certify each year that they remain below the designated income threshold. The District does not place income restrictions on owners of IZ units after the initial purchase, although it does require residents to prove that the unit is in fact their primary residence.

The program has been criticized as ineffectual from the start. In 2015, the Washington Post reported that the program had generated an average of just one affordable for-sale unit,and eight affordable apartments per year in its first six years of existence. The program has become more effective in recent years, however, generating 191 units in fiscal year 2016, making for a grand total of 402 over the program’s first nine years. (Developer lawsuits tied up the program in its early years.)

Applications for new housing permits have risen steadily in the years since D.C. initiated its IZ requirements, signaling that the policy has not had an adverse effect on the overall housing supply. Of course, it’s important to note that these years correspond with the economic recovery following the Great Recession, during which housing production and demand increased nationwide. As housing prices rose over that period, the IZ program has not been much help for the District’s poorest residents. About three quarters of the units generated in FY 2016 went to households making between 50 and 80 percent of the AMI. Still, the program has generated affordable units across a fairly wide swath of the city, as the map below shows. The conspicuous exception is the District’s far Northwest quadrant, which is primarily white and zoned for single-family homes.

Builders and developers: While builders and developers express a range of opinions on IZ, they are usually the primary opponents of these policies. Developers in Chicago and California recently filed lawsuits against their local IZ laws, claiming that they violate private property rights. “Penalizing homebuilders with more costs and mandates deters the creation of more housing, and raises the overall cost of market-rate homes,” said one of the lawyers representing the California Building Association in a press release. This is, essentially, the main argument against IZ.

Policy think tanks and economists: Rather than argue against inclusionary zoning per se, many policy think tanks and economists argue that inclusionary zoning has a perverse effect because it increases housing prices. It puts a damper on housing supply, they say, by increasing the cost of new market rate units. In a 2016 study, UC Berkeley’s Terner Center for Housing Innovation estimated that Oakland’s new inclusionary zoning policy would lead to a 6 to 12 percent reduction in total unit production as compared to a scenario without IZ. Oakland’s policy would also reduce revenue from taxes and fees by between 6 to 19 percent, or about $9.2 to $27.7 million. It would, however, increase the proportion of below-market rate units being produced in the city from 4 percent to 11 percent. Other academic studies have come to similar conclusions.

But not all policy types agree: Another study, from the National Housing Conference’s Center for Housing Policy found that IZ policies “do not lead to significant declines in overall housing production or to increases in market-rate prices.” Other think tanks emphasize carefully calibrating the ratio of affordable to market-rate units mandated by IZ policies so they do not depress overall housing production.

Anti-poverty advocates: For those who live in these units, inclusionary zoning can provide an incredible socioeconomic uplift. But IZ policies are also criticized from the left due to their inability to generate substantial amounts of housing for very low-income people. One study found that only 2 percent of IZ programs target households making less than 50 percent of the AMI. And even those that do represent a tiny percentage of the need: Another study concluded that units produced via IZ represent just 0.1 percent of America’s housing stock. As the case of Washington, D.C., demonstrates, IZ is just one policy in a broad menu of options that cities have to deal with their affordable housing challenges.

Another housing development calculator, from the Grounded Solutions Network, which includes simulations for different levels of density, as well as options for rental and for sale housing, and various other inputs like inclusionary zoning.

Want to design your own IZ policy? Grounded Solutions Network provides guidance, summarized in the below graphic.

What we know about inclusionary zoning thus far (CityLab)

Taking inclusionary zoning all the way to SCOTUS (CityLab)