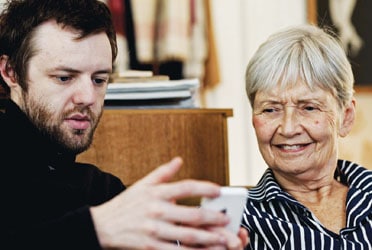 When Nesterly founder Noelle Marcus was at Massachusetts Institute of Technology (MIT) studying housing issues and living in the throes of the affordable housing crisis here, she had a shocking moment when she saw some

One in three households, she learned, in Boston would be headed by a single person over the age of 65 by 2035. Half of them will live alone in large houses.

“That’s one-third of Boston’s housing infrastructure,” she said. “Many spare bedrooms are sitting empty in the homes of older adult households. In many cities, the fastest growing populations are the over 65 folks. If half of them will live alone by 2035, that’s a lot of space. I also saw that nationwide there are 54 million spare bedrooms sitting vacant. I thought that if we did use these for students and graduate students, that could really help. AirBNB has taught us about the shared economy as have so many other companies. Instead of renting to tourists, I thought, ‘What if we could use these empty bedrooms for people who really needed it for affordable housing.”

There was born Nesterly, a homesharing service launched in Boston last fall by Mayor Martin Walsh and Marcus that pairs up older adults with empty bedrooms and graduate students who need an affordable place to live.

“In Boston, we are committed to making our city the best place to age and live well,” said Mayor Walsh. “Intergenerational living has great benefits for older Bostonians as they build strong relationships with younger generations, earn additional income, and help create connected communities.”

Nesterly has recently put out a new map of potentially overhoused seniors in all of Boston and their geographic location in relation to college and university facilities. In that map, Charlestown is one of the locations where seniors and older adults are likely overhoused and potentially have the space. They are currently putting out the word in order to find households with unoccupied rooms that owners would be willing to rent out to students or young people.

Once found, Nesterly then works closely with the host and guest applicants to help them find housing opportunities that would go beyond logistical matching to create stronger community relationships.

But the argument for older adults sharing their homes goes beyond economics and urban planning, said Marcus.

“From an urban planning perspective, this is really, really significant,” she said. “But there are also studies looking into loneliness and social isolation for older adults. They say now it’s worse than a pack of cigarettes a day for your health. Inter-generational home sharing is a way to combat that. Once we started this, we realized that people are hungry to interact with people from other generations. There’s a lot we can learn from each other. It allows people to age in place in their home and avoid the isolation that can come from that.”

The benefits for older homeowners is, obviously, some extra money every month – from about $600 to $700. Also, guests can be counted on to do things like change lightbulbs, shovel snow, walk the dog or be technology tutors.

All rent payments are done automatically from bank account to bank account so the homeowner doesn’t have to chase down the money. Meanwhile, Nesterly serves as an in-between to help the homeowner and their family find the right match, do background checks and set up an up-front agreement spelling out all the expectations of the situation.

Residents can sign up to host or rent at www.nesterly.io