Home / Housing News / In A Few Years, This Could Be Boston’s Smallest, Cheapest Apartment 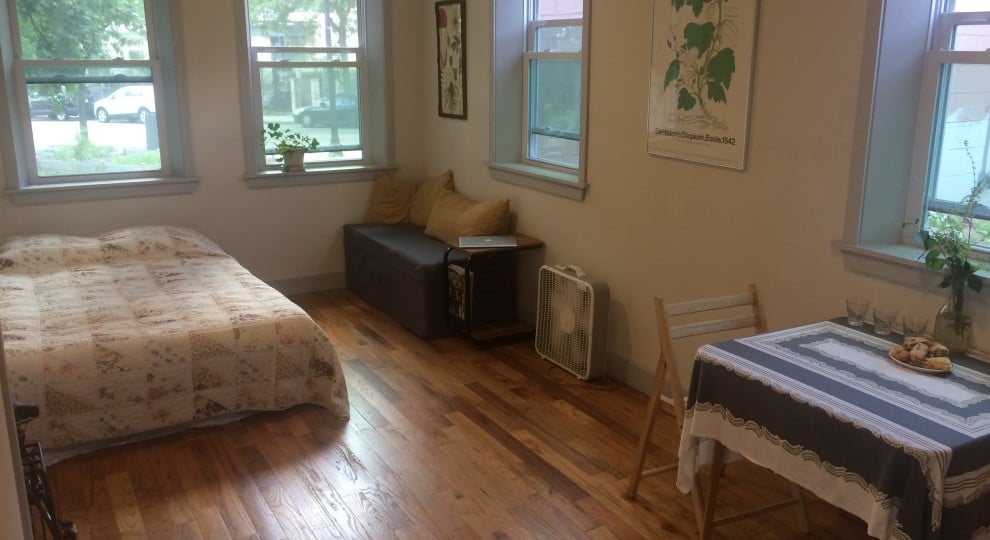 
On a vacant lot in Dorchester’s Fields Corner neighborhood,there's a small, boxy brown structure that looks like a supply shed — but it's actually an experiment in affordable housing.

"This is the model of one of 14 very affordable studios we want to build on this lot here," explained Vivian Girard, a Frenchman-turned-Bostonian who's called Dorchester home since 2002. "So we built a model to show it to the community, to neighbors, to local elected officials."

At just 260 square feet, the model unit is what might be called, euphemistically, "cozy." But it's surprisingly inviting, with bright hardwood floors and plenty of natural light. There's a bed, table, chair, closet, and bathroom — plus a kitchen that folds behind doors when not in use.

If Girard's plan comes to fruition, 14 of these units will be packed into a building that's about the size of a traditional triple-decker. And they’ll be extremely cheap — with eight units renting for $650 a month and six renting for $850. Utilities would be included. What's more, tenants would receive a guarantee that annual rent increases would never outpace the growth of the Consumer Price Index.

A few things inspired Girard’s project, which is named for its street address, 141 Westville. First, when he was in his thirties, he spent a few years as a single guy reluctantly living with roommates.

"That’s all I could afford," Girard recalled. "So this is what I had wanted to live in, on [my] budget."

Today, Girard is married. He, his wife, and a third business partner run the home.stead bakery and café in Fields Corner, just a few blocks away. They pay pretty well — $15 to $17 an hour, Girard said — but even so, their employees face the same quandary Girard did a few years ago.

"At this wage level, there’s nothing affordable for a single person to live in other than living with housemates," Girard said. "And most people, once they get past their mid-twenties, or sometime earlier, they would much rather have their own space."

So Girard decided to create it. He bought the land for 141 Westville at a bargain last year, paying just $95,000. He’s hoping to start building the project in 2019 and renting in 2020 — and to give home.stead staffers first crack at the units when they're available.

During a recent lunch shift, one of those employees, Tamarah Riddick, beamed as she discussed the possibility of calling 141 Westville home.

"I’m on the list." Riddick said. "I made sure I’m at least number two, if not number one."

Riddick is in her early twenties. She's studying history at Bunker Hill Community College, and living with her mother because, she said, can’t afford not to.

If and when she gets one of the 141 Westville units, Riddick said, "It would actually give me some room to save for a car. And I’m thinking of dual enrolling to another school, so I’d be able to pay the tuition there with the money saved."

The project isn't a done deal just yet. Usually, Boston doesn’t allow new units smaller than 450 square feet. While exceptions have been made for other micro-housing projects, they generally provide some sort of shared communal living space as well as private living quarters.

"The costs would go up, and the units wouldn’t be as deeply affordable as they are in his current vision," Holley said. "So I think he’ll have to do a little work and get a lot of community support."

For the record, Holley hopes he succeeds.

"Any micro units that get built [in Boston], they tend to be — developers call them 'millennial resorts'," Holley said. "They’re so high end — even 300-square-foot units are starting at $2500 a month, and then they have pet spas and wine-tasting nights that drive up the cost."

In contrast, 141 Westville takes the opposite approach, as Girard freely admits.

"Everything here," he said, "is about trade-offs and compromises."