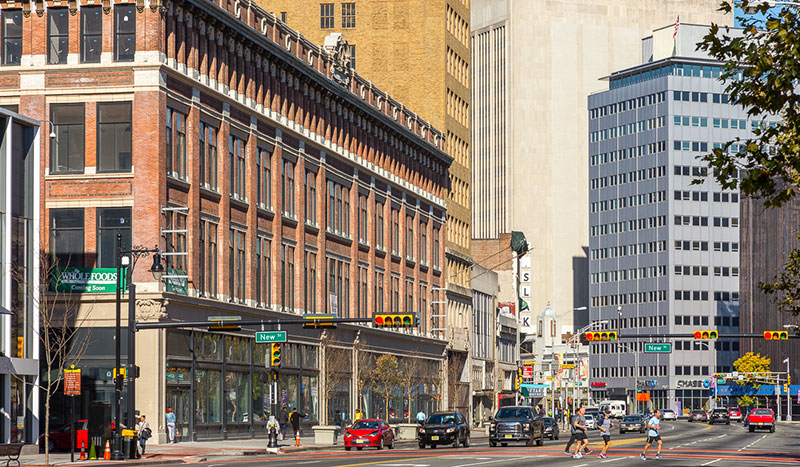 
The ULI Terwilliger Center for Housing has announced finalists for this year’s Jack Kemp Excellence in Affordable and Workforce Housing Award, which honors exemplary developments that ensure housing affordability for people with a range of incomes.

The award recognizes efforts by the development community to increase the supply of housing that is affordable to households earning less than 120 percent of the area median income (AMI).

Developments competing for the Kemp Award may be fully affordable, with all units designated for low- to moderate-income residents; or they may contain a mix of affordable and market-rate units. The winner will be announced during the 2018 ULI Fall Meeting, October 8–11 in Boston.

The finalists are:
– Alvista, Jamaica, New York. This 25-story, 380-unit mixed-income, multifamily, new-construction development is located in the transit-oriented retail hub of the downtown Jamaica neighborhood in Queens. The project is financed under the New York City Housing Development Corporation’s Mixed Middle Income (M²) Program, which is a contender for this year’s ULI Larson Housing Policy Leadership Award.
– Aspen Skiing Company Workforce Housing, Aspen, Colorado. This development repurposed a 40-year-old recreational-vehicle campground located on a major transit corridor to serve as a 120-bed workforce housing community of small, high-quality, factory-built trailer coaches. These popular rental units are super efficient and reconfigurable, and fit the needs of various tenant types.
– Avenue Place/Avenue Terrace, Houston. Located in the heart of Near Northside, a dense, tightly knit, largely Hispanic community, Avenue Place/Avenue Terrace preserves affordability and strengthens the neighborhood by converting 20 acres (8 ha) of industrial wasteland into a thriving community of mixed-income, sustainable, high-quality housing with links to public transportation and accessible green space.
– Caesura, Brooklyn, New York. Located at the nexus of the Downtown Brooklyn Cultural District, Caesura consists of 123 units of mixed-income housing composed of micro-units and conventional apartments. The building includes 24,600 square feet (2,300 sq m) of cultural space and soon will offer dining.
– Clybourn 1200, Chicago. This development is a mixed-income, mixed-use community in the former Cabrini-Green public housing development. Developed with the intent of long-term sustainability and forward-thinking design, Clybourn 1200 offers both market-rate and affordable living accommodations with numerous amenities.
– Greenwich Park Apartments, Milwaukee. This high-quality, mixed-income development combines 14 supportive apartments for very low-income households, 22 affordable apartments for people earning at or below 60 percent of AMI, and 17 market-rate apartments. Located next to Columbia St. Mary’s Hospital, Greenwich Park gives low-income residents access to services that might otherwise be difficult to obtain while offering market-rate housing near area businesses.
– Harbor Place, Haverhill, Massachusetts. This project has transformed vacant, underused waterfront parcels into a development that provides workforce housing opportunities in a mixed-income, mixed-use environment. It has also reinvigorated downtown Haverhill and the city’s riverfront area.
– Keauhou Lane, Honolulu. This mixed-use, transit-oriented development adds much-needed housing in urban Honolulu. It has 209 units of affordable housing and more than 30,000 square feet (2,800 sq m) of retail, grocery, and restaurant space. About 25 percent of the site is dedicated to public open space that connects directly to the city’s new Civic Center light-rail station.
– Lakeside, San Leandro, California. Lakeside provides 840 high-quality, affordable apartments across two campuses on the eastern shore of San Francisco Bay. The 48-building development includes three pools, a clubhouse, and daycare facilities, plus offers wellness classes, adult education, career counseling, and a community garden.
– Metro Green Terrace, Stamford, Connecticut. The third phase of a 231-unit mixed-income development completed over the past ten years, this project consists of 131 apartment units located in a smart-growth neighborhood one block from the Stamford train station and within walking distance of entertainment and shopping in the downtown business district.
– The Conway Center, Washington, D.C. The Conway Center is a $90 million development by So Others Might Eat (SOME), an interfaith, community-based nonprofit organization that helps low-income people in the District of Columbia. SOME developed 202 units of affordable rental housing as part of a mixed-use project in an underserved area of the city.
– The Residences at Government Center, Fairfax, Virginia. This 1,500-unit workforce housing development, created through a public/private partnership, includes a fitness facility, children’s play area, conference room, club room, business center, pool, and barbecue area.
– Vivo Apartment Homes, Cambridge, Massachusetts. The first residential building in the new Science Park of Cambridge’s Kendall Square, Vivo is within walking distance of the Massachusetts Institute of Technology and is close to public transit. It was constructed using prefabricated components designed for easy on-site assembly.

“Through the Kemp Award, we are raising awareness of the critical role that affordable housing plays in creating successful communities,” says Terwilliger Center founder J. Ronald Terwilliger, chairman of Terwilliger Pappas Multifamily Partners. “These are the types of real estate projects that are often the hardest to pull together, but at the same time the most inspiring to complete. The finalists for this year’s award demonstrate that affordable and workforce housing is achievable in a wide range of markets, providing economic and social benefits that extend far beyond the developments.”

ULI established the Jack Kemp Excellence in Affordable and Workforce Housing Award in 2008, naming the award in memory of Jack Kemp, former secretary of the U.S. Department of Housing and Urban Development who had served as a Terwilliger Center national advisory board member. The award is given annually to affordable and workforce housing developments that represent outstanding achievements in several areas, including affordability, innovative financing and building technologies, proximity to employment centers and transportation hubs, quality of design, involvement of public/private partnerships, and replicability of the development, among other criteria.